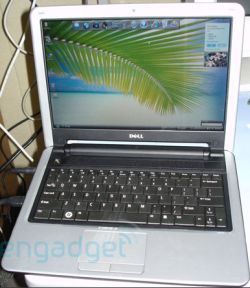 Remember the Dell E Slim? You know, the 12 inch notebook that was featured in the same leaked documents that tipped us off to the Dell Inspiron Mini netbook back in June? At 12 inches, the Dell E Slim certainly ain’t a netbook. But it’s certainly an attractive alternative to a full sized computer. And if the rumors are true, it won’t cost much more than your typical netbook.

Now Engadget has snagged what appears to be the first photo of the laptop. There’s no denying the picture shows a Dell laptop. Because, well, there’s a Dell logo on the computer. But also because the overall design just kind of screams Dell. The machine seems to share some style elements with the Dell Inspiron Mini line of netbooks, but fortunately the Dell E Slim (if that is its real name) appears to have a full sized keyboard complete with Fn keys and a right shift kkey that’s placed to the left of the up arrow, not to the right as it is on the Inspiron Mini, Asus Eee PC, and several other netbooks.

While this notebook is too large to be a netbook, I know many of you have been asking about it. So here you go. It may really exist. And it may be released at some point. That’s all I’ve got for now.