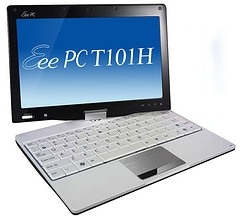 The Eee PC T101H is a 10 inch convertible tablet-style netbook from Asus. The company first showed a demo of the netbook at CES in January, 2009 but it has yet to hit the streets. And now Netbook News.de is reporting that Asus plans to show off a revamped model at CES 2010. The new model could be available as soon as Q1, 2010.

This will be the second convertible tablet from Asus. The first was the Eee PC T91, which has an 8.9 inch display. But that model had an incredibly tiny keyboard and an awkwardly slow processor. The Eee PC T101H will have a larger keyboard, a larger 10.2 inch touchscreen display, and a faster processor.

According to a Netbook News.de tipster, the updated T101H will have a multi-touch display, a 1.66GHz Intel Atom N450 pineview processor, 1GB of RAM, a 16GB solid state disk, and 802.11b/g/n WiFi, Bluetooth, and optional GPS, 3G, and DVB-T modules. The laptop will also reportedly have an accelerometer and a battery that’s good for up to 8 hours.

It’ll ship with Windows 7 Home Premium. Now for the bad news. The laptop will reportedly have a starting price of nearly 700 Euros, or over $1000 US.

I’m going to take all of this with a grain of salt for now. After all, we’re talking about an anonymous tip regarding a product that was technically introduced more than 10 months ago.