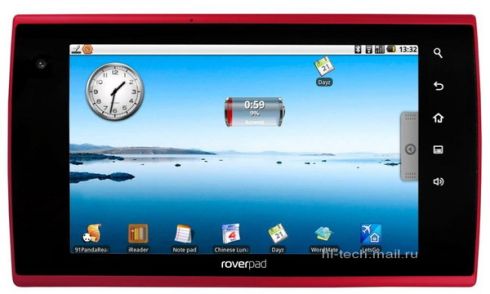 Just in case you thought tablets only showed up in China these days, Rover Computer has introduced 5 new tablets that will be hitting Russia later this year.

That includes a 7 inch touchscreen tablet called the Air G70 which will run Windows CE 6.0 and 4 models running Google Android.

Rover is also introducing several Android tablets with screens ranging from 5 to 7 inches. It looks like most will be stuck with Android 1.5 or 1.6 and pretty anemic specs. But the RoverPad Tega W70 will run Android 2.1 and pack an NVIDIA Tegra processor for high performance graphics. That model will also include 512MB of RAM, 4GB of storage, and an HDMI output.

Update: You know what? I knew that red tablet looked familiar. It looks like it’s a rebranded version of the Compal NAZ-10 tablet, just like Aigo’s Tegra 2 tablet.

One reply on “Rover introduces 5 tablet computers in Russia”