Barnes & Noble now offers two versions of the NOOK Tablet. There’s the 16GB model with 1GB of RAM which has been available since November, and a new cheaper model with 8GB of storage and 512MB of RAM. Because of minor differences, it turns out you can’t use exactly the same tools to root the 8GB tablet as the 16GB… but now there is a way to root the new tablet. 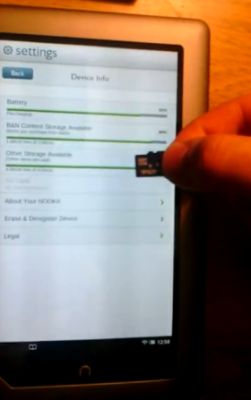 Rooting an Android phone or tablet provides access to hidden files and settings, making it possible to run apps that require deep access to your file system or make dramatic changes to your device. For instance you can use apps such as Titanium Backup to backup or restore all of the apps on your device.

It builds on recently released tools that allow you to boot the tablet from a microSD card.

In a nutshell, you need to prepare microSD card by dumping the contents of jichuan89’s tool to the card, and then boot the tablet with the card insserted. You can find detailed instructions in the forum post.

When all is said and done, you should have a rooted NOOK Tablet with the Android Market installed. The tool will also add SuperUser to your tablet and install the HomeCatcher app which lets you use the “n” button on the tablet to launch third party home screen apps.

, and it should go without saying that attempting to root your tablet will void your warranty, so don’t expect any support from Barnes & Noble if anything goes wrong.

Update: Jichuan89 has released a disk image you can “burn” to your microSD card using Nookie. This should make the process a little simpler, although you’re still taking your warranty into your own hands if you try to root your NOOK Tablet.