BlueStacks is a utility that lets you run a number of Android apps on a Windows PC. You don’t need to reboot your PC or exit Windows at all — Windows apps and Android apps can run side-by-side.

Out of the box, BlueStacks allows you to copy applications from your phone to your PC or you can download some apps from the BlueStacks. But the company only offers a small fraction of the nearly half-million apps available in the Google Play Store. 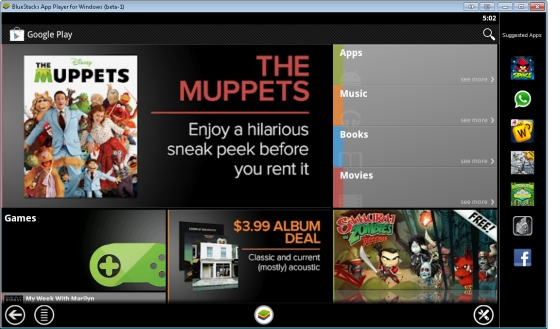 But it turns out you can root BlueStacks and install the Google Play Store so you can download virtually any app on your PC.

The folks at Droid Hackings have posted instructions on gaining root access to the BlueStacks file system, and you can find more detailed instructions for enabling the Google Play Store at the xda-developers forum.

Bear in mind that not all Android apps will run perfectly on a Windows PC. They’re generally designed for use with a smartphone or tablet touchscreen, not a PC with a keyboard and mouse.

But it turns out rooting isn’t just for devices running the Android operating system. We already saw that it was possible to root earlier versions of the BlackBerry PlayBook in order to install the Android Market/Google Play Store on a tablet with only an Android App Player rather than a full Android OS. Now it looks like we can do something similar with an Android emulation tool for Windows.

via imran sabir and Android Police