Roost is an Internet-of-Things gadget that makes it possible for anyone with a smoke detector to turn it into a smart home device that can connect to a mobile device. There’s no need to replace your existing smoke detector with an expensive new model, and you don’t have to permanently attach anything to your ceiling or do anything else your landlord might not approve of.

That’s because Roost is basically a smart 9-volt battery. However, it isn’t good for just any gadget that uses that particular type of battery. It is designed specifically for smoke detectors and, when paired with a smartphone will send you alerts. 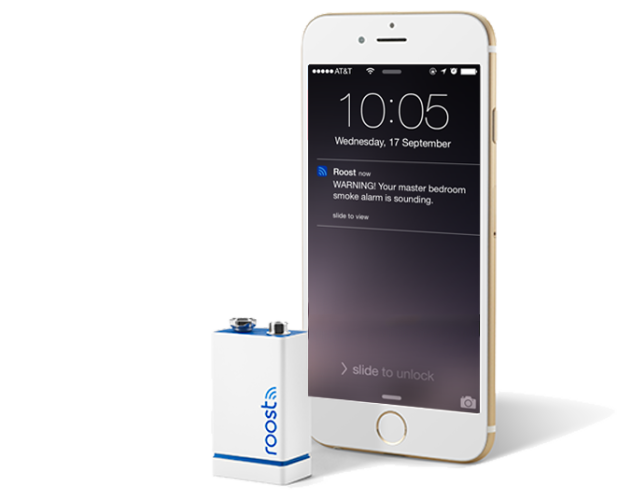 Roost was successfully crowd-funded during a Kickstarter campaign last year. The product is now ready for the general public with preorders available now through the company’s website, or Amazon. A single 9V battery costs $35. A two-pack is discounted at $65. Replacement lithium batteries cost $15.

While that’s kind of expensive for a battery, it’s a lot cheaper than Google’s Nest Project, which is a smart smoke detector that replaces your existing one. It looks good and has great features, but it also costs $100. So, if you are looking for something less expensive, and less permanent, Roost might be an alternative worth looking into.

Via a compatible app, the smart battery will let you know when it is running out of juice, which the company claims won’t be for at least five years. So, no more annoying chirping in the middle of the night… at least for a while.

It will also let you “snooze” the alarm if it went off because you’ve burned the toast again. When the alarm goes off, you can tap the alert on your mobile device to quiet it.

If you are away, you will receive an alert if the alarm goes off. Plus, you can share the information with friends and neighbors so that, if you are on vacation when the smoke alarm goes off, the designated contact will also know right away.

You can also purchase a replacement lithium battery pack for $15. So, when the juice finally does run out, you don’t have to buy an entire new Roost.