Rockchip’s RK3188 quad-core processor is already one of the most powerful ARM Cortex-A9 processors on the market. But it turns out you can make it even faster.

Out of the box, most tablets and mini PCs that come with the processor run at clock speeds up to 1.6 GHz. But the folks at ArcTablet created custom firmware that lets you run at speeds up to 1.92 GHz. 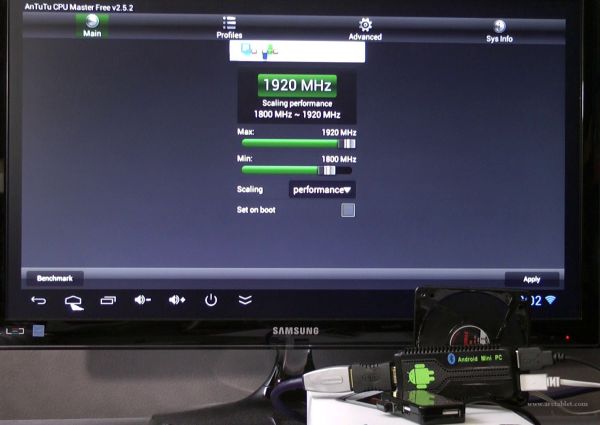 The results are pretty noticeable, with about a 25 percent higher score int he Antutu benchmark, and a nearly 40 percent boost in Linpack.

Of course, overclocking can cause increased heat generation, shorter battery life, and stability problems in some situations. While you don’t have to worry about battery life if you’re using an Android mini PC, there’s still a chance the chip could overheat — ArcTablet pointed a fan at their UG007 Android TV stick to help keep it cool during the tests.

You don’t need to overclock the RK3188 chip to run any individual apps — there   aren’t many Android games or utilities that I’m aware of that won’t run well on the chip at 1.6 GHz. But if you’re hoping to speed up web page load times, improve the overall responsiveness of a system, or just see if you can melt your CPU, it’s nice to know you can push the chip’s limits.

Or you could look for a device with a faster chip like a Qualcomm Snapdragon 600 or Samsung Exynos 5 processor. But odds are you’ll have to pay much more to get a device with one of those chips.