Chinese company Rockchip may be best known for making processors for Android phones, tablets, and other devices. But the company also makes software to run on those devices. Earlier this year the company introduced a remote control app, for instance, that lets you control one Android device from another.

Now Rockchip is launching a heavily tweaked version of the Android operating system which adds multi-window support. Basically, it lets you run any app in a small, resizable window — and you can run multiple windows on the screen at the same time.

This lets you do things like browse the web, watch a movie, respond to email, and play a game all at the same time. 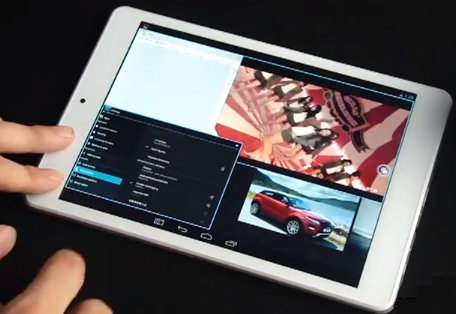 Tablet maker Chuwi kind of spilled the beans a few weeks ago when it started showing off multi-window support on its tablets. But this week Rockchip issued a press release and demo video explaining how the new system works.

The software supports true multi-tasking, which means that an app won’t pause when it loses focus. You can keep watching a video in one window while playing a game in another, for instance.

While users can manually resize or move any window, there’s also an option to hit a multi-tasking button in the Android toolbar that arranges your open apps so that each takes up 1/4th of the screen or so that they’re stacked in tiles that you can flip through to find the app you’re looking for.

Rockchip has also added an extra option to the Android pull-down menu. As usual, when you swipe down on the left side of a tablet you get notifications and pulling down on the right brings up your quick-launch and settings icons. But you can also pull down from the middle  to bring up shortcuts for apps that run in split-screen or multi-window mode.

You can also tap a button to make any window full screen.