The Radxa Rock Pi 4 is a single-board computer with a Rockchip RK3399 processor, Android and (some) Linux support, and support for up to a 4K display with a 60 Hz refresh rate.

Previously available in Model A and Model B configurations, there’s now a new Rock Pi 4 Model C which has the same basic design as its predecessors, but instead of a single HDMI 2.0 port, it supports two external displays thanks to a micro HDMI port and a mini DisplayPort.

The new model also has an M.2 connector with support for NVMe storage.

First announced in October 2019, the Radxa Rock Pi 4 Model C was supposed to ship the following month, but it was delayed by over half a year. It’s now finally available for purchase for $59. 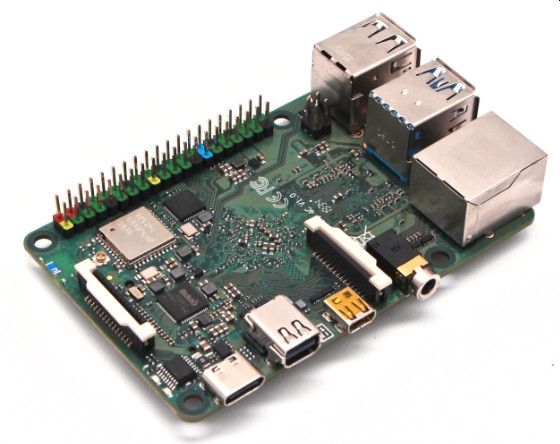 The Rock Pi Model C is powered by a Rockchip RK3399 hexa-core processor and features 4G of LPDDR4 RAM and support for 802.11ac WiFi and Bluetooth 5.0.

For storage you can use a microSD card, an external NVMe SSD, or an optional eMMC module.

Other features include a 3.5mm audio port, Gigabit Ethernet (with support for power-over-Ethernet when you use an optional HAT), and a 40-pin GPIO interface plus MIPI-CSI2 connector for a camera.

One thing to keep in mind is that while the device supports dual displays, there are some limitations:

You can use two displays at once, but because the Rock Pi 4C’s USB Type-C controller is used to support dual USB 3.0 host ports as well as the mini DisplayPort, it’s only a 2-lane DisplayPort rather than the usual 4-lanes.