Chinese chip maker Rockchip started talking about the RK3588 octa-core processor more than two years ago, but due to a series of delays it has yet to actually ship.

That could change soon. The company shared detailed specs and benchmark results for its highest-performance processor to date during the 2021 Rockchip Developer Conference. And at least two companies are planning to launch single-board computers with RK3588 processors in 2022. 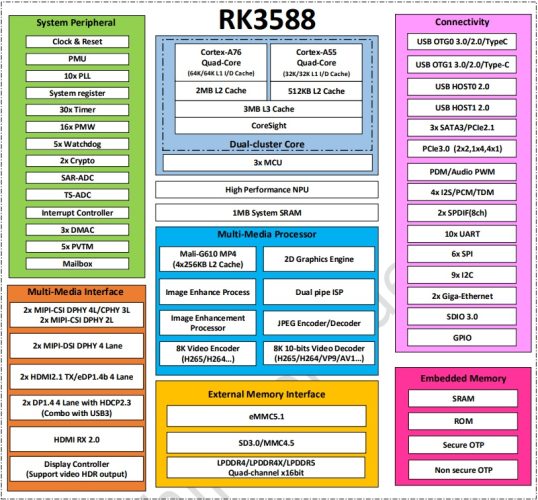 While those specs won’t be enough to make this processor competitive with the latest ARM-based flagship chips from Qualcomm or MediaTek, the new chip should offer a major performance boost over older Rockchip processors like the popular RK3399, a hexa-core chip found in a number of older Chromebooks, single-board, computers, and and even some laptops like the PineBook Pro low-cost Linux laptop.

According to Pine64’s Lukasz Erecinski, the new chip brings “entry-level desktop-class ARM CPU performance and plenty of IO options,” and it’s likely that upcoming single-board computers and other products from Pine64 could use the new chip. The upcoming Radxa Rock 5 Model B is also expected to use the RK3588 processor.

You can find more details about the RK3588 processor at CNX-Software, including the full 35-page datasheet and a roundup of key details.