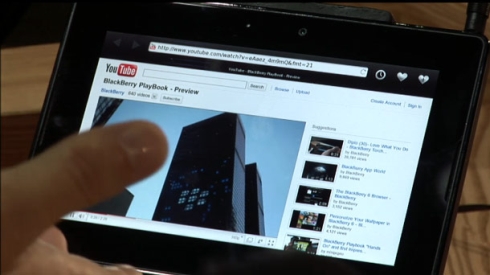 This morning Adobe announced that Adobe AIR 2.5 would work on a range of devices including TVs, Android smartphones, and tablets like the BlackBerry PlayBook. Meanwhile RIM launched the SDK for developing AIR apps for the tablet today, as well as a BlackBerry PlayBook simulator. So it probably shouldn’t come as a huge surprise that RIM’s Mike Lazaridis took the stage at the Adobe MAX conference today to show off the tablet running Adobe Flash and other apps.

What’s notable is that this is the first time we’ve actually seen the PlayBook in action. When RIM introduced the tablet last month, the company hid away the demo units behind glass cases. We’ve seen demo videos showing how they should work, but it’s nice to actually see a real person holding the device and showing what happens when you actually tap the screen.

Update: Now with video after the break, thanks to Business Insider.