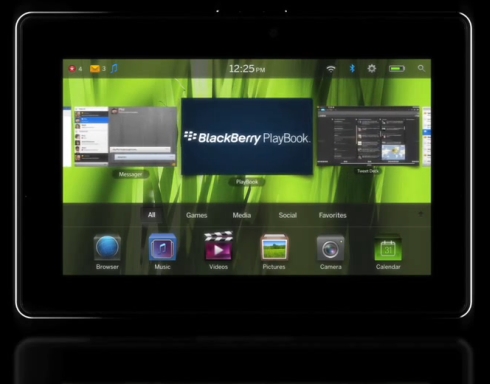 After months of leaks, rumors, and speculation Research in Motion has introduced its upcoming tablet. Thankfully, it’s not called the BlackPad. Somewhat confusingly though, RIM is positioning it as the first “enterprise ready” tablet, and calling it the BlackBerry PlayBook.

RIM says the tablet will likely be available in the US in early 2011. It will roll out to other markets in the second quarter 2011. There’s no word on how much it will cost yet, but I suspect it will be up to telephone companies to work with BlackBerry on pricing.

As expected, the tablet is designed to be paired with a Blackberry smartphone so you can access the internet using your phone’s mobile broadband connection. You’ll be able to receive push email, appointments, tasks, and other information by pairing with your phone.

There will be a number of ways to develop apps for the PlayBook, which does not use the same OS as BlackBerry phones. There will be a new Java virtual machine and native SDK, OpenGL support and support for POSIX and WebWorks.

Thanks to full support for Flash and Adobe AIR, it looks like developers will also be able to write apps for the PlayBook using AIR. That means at least some PlayBook apps should be able to run on Windows, OS X, or Linux.

RIM has posted the promo video for the tablet. You can check it out after the break. The user interface looks pretty slick, but it really does seem that while RIM is emphasizing the “enterprise ready” capabilities of the PlayBook,the video really emphasizes the multimedia capabilities of the device for watching local and web video and even playing games. Oh yeah, and I guess you can also use it for video conferencing, viewing documents, and other business tasks.

You can also find more photos after the break.

via CrackBerry and Engadget