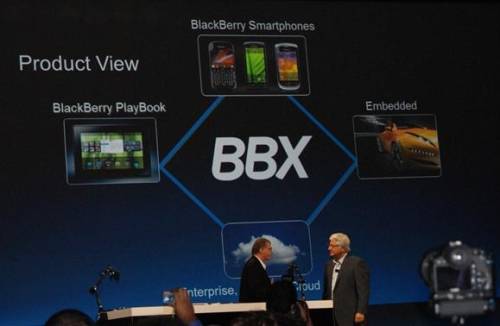 Research in Motion has announced that its next-generation tablets and smartphones will both run the same operating system. Right now the BlackBerry PlayBook tablet runs something called BlackBerry Tablet OS (which is based on QNX software), while the company’s phones run BlackBerry OS.

Future devices will run something new called BBX. RIM says it combines the features of of BlackBerry OS and QNX.

In other words, it’s kind of like RIM’s version of Google Android Ice Cream Sandwich.

While Apple’s iPad ran a slightly modified version of the iPhone operating system from day one, Google and RIM have both taken the rather odd approach of launching tablet operating systems that don’t fully support smartphone apps initially, only to offer software updates down the road to unify the platforms.

Developers will be able to write apps for the BBX platform using HTML5, BlackBerry WebWorks, Adobe AIR, C/C++, and the BlackBerry Runtime for Android. Did you catch that last part? It sounds like you’ll be able to run Android apps on future BlackBerry smartphones, not just tabelts.

Apps coded for the BlackBerry PlayBook will also be able to run on BBX.