Rikomagic’s latest TV stick is a bit chunky, but that’s because in addition to two full-sized USB ports, a microSD card slot, an HDMI connector, WiFi and Bluetooth, the Rikomagic V5 has a Ethernet jack.

Update: The Rikomagic V5 is now available from AliExpress for $108.

There are plenty of other sticks like the Rikomagic V5 that you can plug into the HDMI port of your television to run Android apps on the big screen.

But this is one of the few I’ve seen with support for Gigabit Ethernet and 802.11ac WiFi. 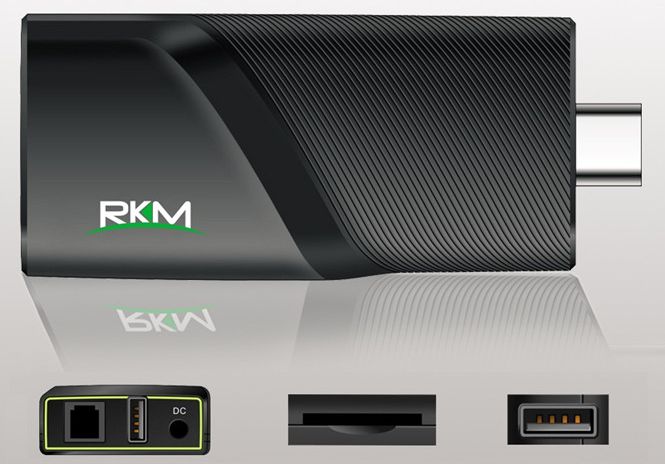 The Rikomagic V5 should be available later in November for a little more than $100.

It features 2GB of RAM and 8GB to 16GB of built-in storage. The device is powered by a Rockchip RK3288 processor.

Google recently launched Android TV, a software platform based on Android 5.0 which is designed to bring Android apps to a big screen. The Rikomagic V5 doesn’t run that.

Instead, it ships with Android 4.4 KitKat installed. That’s a mixed blessing. On the one hand devices like this have a user interface that was designed for touchscreen phones and tablets and not for TVs (although many Android boxes and sticks ship with custom app launchers which help a little bit). On the other hand you don’t have to wait for developers to update their Android apps to support Android TV before they become available.

The V5 comes with full access to the Google Play Store, which means you can download and install many apps that might not officially be supported on an Android TV device like the Google Nexus Player.

Back to that first hand though… some of those apps might be tough to actually use with a remote control rather than a keyboard, mouse, or touchscreen.

Anyway, it’s hard for me not to compare Android boxes and Android TV boxes since I just wrote a 5,000+ word review of the Nexus Player. But if you’re a fan of running the full Android operating system instead of Android TV and you’re just looking for a pocket-sized device with better connectivity options than most other devices in its class, the Rikomagic V5 looks like it could be interesting.