The Rikomagic MK802 IV LE is a tiny ARM-based device that you can plug into a TV or monitor’s HDMI port to basically turn it into a full-fledged computer. It’s based on the same hardware as an Android TV stick, but this is one of the first such devices to ship with Ubuntu Linux instead of Android.

The MK802 IV LE features a version of Ubuntu 13.04 called PicUntu, and it was first introduced this summer.

Now the little Linux computer is shipping, and you can pick up an 8GB model from the Rikomagic UK store for £79.99. There’s also a model with 16GB of storage for £84.99. 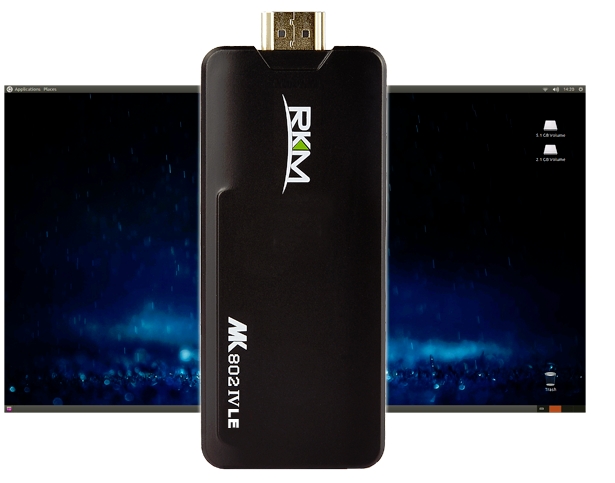 At one end of the stick you’ll find an HDMI connector which you can plug straight into the HDMI port of your display. There are also two microUSB ports (one of which you’ll use for power), a full-sized USB port, and a microSD card slot.

Both the 8GB and 16GB models come with a Sandisk Class 10 16GB microSD card and a small HDMI extension cable in case your display’s HDMI port is in an awkward location.

You can save a few bucks and install PicUntu yourself on most Android TV sticks with RK3188 processors. But it’s tough to find this type of device with 16GB of built-in storage — and if you’d rather not go through the hassle of installing the operating system yourself, it’s nice to have another option.

At this point hardware-accelerated graphics are still a work in progress. But the RK3188 CPU is fast enough to handle HD video playback even without hardware acceleration.

I was pretty impressed with the performance of PicUntu on the T518 mini PC I tested earlier this month, although I wasn’t able to kick the tires as much as I’d like since the WiFi wasn’t working.

Rikomagic UK’s Andy Kirby put together a video showing some of what you can do with Ubuntu on an MK802 IV LE — in this case using the open source Linux MultiMedia Studio music production suite.