Rikomagic is giving the recently released MK802 III mini PC a slight spec bump. The new MK802 IIIs is still a tiny computer with a USB port on one end, an HDMI adapter on the other, and a Rockchip RK3066 dual core process in the middle.

But the new model adds two new features: Bluetooth support, an ESD circuit for better stability, and support for software apps that let you actually turn off the little computer without unplugging it. 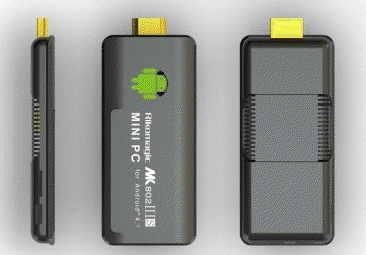 Those might not sound like big changes… but while dozens of these Android mini PCs have come out of China in recent months, most have lacked an off switch. The only way to turn them off is typically to pull the plug when you’re done using them.

While the MK802 IIIs doesn’t have an off “switch” per se, at least it will support software that lets you power down an Android computer.

Independent developers have also been making progress porting Ubuntu Linux to run on devices with RK3066 chips. But unless you’re a developer, I’d only recommend picking up a product like this if you’re cool with Android, because it could be a while before we see a stable release of Ubuntu or other desktop Linux software.

We might only be a few days away from seeing the first working version of Ubuntu for the MK802 III, but I wouldn’t expect it to run as well as Android for a little while.

In other words, like most other “mini PCs” we’ve seen recently, the MK802 IIIs is basically an inexpensive device designed to let you run Android apps on your TV using a USB or wireless mouse, keyboard, or remote control.

Update: Check out our hands-on impressions of the RikoMagic MK802 IIIs.