There’s no shortage of handheld gaming devices capable of running Nintendo games… but most of them do that thanks to an emulator and ROMs that you download from shady areas of the internet.

I mean, theoretically it’s possible to rip games you own from the original NES game cartridges, but it’s not exactly easy to do.

But if you still have some of those old games lying around the upcoming Retro Champ handheld console from My Arcade will actually let you play them. Just insert the cart and you can play on the go. 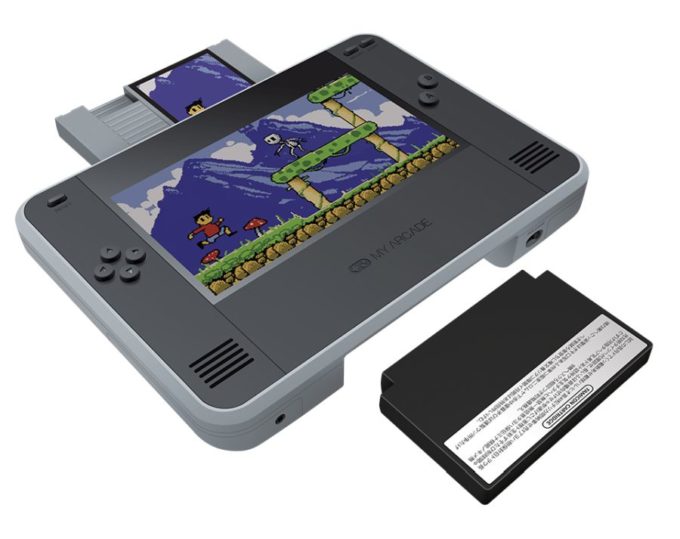 The device features a 7 inch display, buttons on the left and right sides of the screen, and a cartridge slot on the top.

It also has a battery that the company says should last for 3-5 hours of game play time, and an HDMI port that lets you run a line out to a TV if you want to ignore the thing that makes this thing special — it works with regular NES carts and it doesn’t need to be plugged into a TV!

If you do want to run a line to a TV and use the Retro Champ like a real NES, My Arcade says it’s compatible with the company’s optional Super GamePad wireless controllers (which sell for $25 each) if you want to plug it in and use it like an NES.

The Retro Champ has built-in kickstand and a “mini cleaning kit” that lets you keep cartridges in working order without blowing on them.

Want to use this for something other than playing classic NES or Famicom games? Tough. That’s pretty much all it does.

There’s no card reader and no official support for installing additional emulators or loading ROMs into internal storage.

The Retro Champ is larger than a Nintendo Switch, and it does a lot less. But it’s cheaper and geekier in a retro kind of way.

If you want to get a better idea of how the system looks and feels, Gizmodo has a in-depth hands-on article.

The Retro Champ isn’t actually available yet, but My Arcade says it should ship in June, 2019.