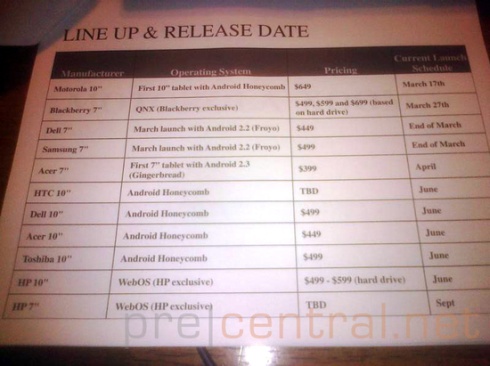 HP has yet to unveil an official price or launch date for the upcoming TouchPad tablet, but the folks at PreCentral have snagged a document from a “major US retailer” suggesting that the tablet could hit the streets in June for $499 to $599.

Note that this comes from a retailer and not HP though. So I’d take it with a grain of salt. While I’d certainly hope that HP is communicating with retailers to let them know what’s in the pipeline, some stores may also be tracking internet rumors just so they can be ready for new devices if and when they do arrive.

The same document, for instances, says that the first Motorola 10 inch tablet will ship on march 17th for $649. Last time I checked, the Motorola XOOM actually hit the streets in late February for about $799 — although I’m holding out hope that the document is referring to a cheaper WiFi-only model of the tbalet.

If the info is accurate, it looks like we could see the BlackBerry PlayBook hit the streets on March 27th for $499 and up, a new (perhaps WiFi-only) Samsung Galaxy Tab 7 inch tablet in March, an Acer 7 inch tablet with Android 2.3 in April, and a whole slew of 10 inch models from Dell, HTC, Acer, and Toshiba in June for around $499.

It also looks like a 7 inch HP TouchPad may be on the docket for September.

Update: It looks like that “major US retailer” isn’t alone. Droid-Life reports that Staples has a similar list.