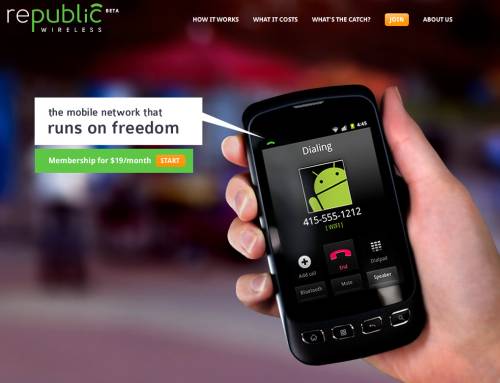 Republic Wireless has launched a new mobile service for US customers that offers unlimited voice, text, and data for just $19 per month. But here’s the catch — the service relies on Voice Over IP technology for phone calls and text message, so really you’re only paying for a 3G data plan.

Here’s how it works. When you sign up for service, Republic Wireless will send you an Android smartphone that’s been configured to make phone calls and send and receive text messages over WiFi or 3G connections.

When you’re at home, all of your calls and messages will be routed through your home WiFi network. If you leave the house, the phone will switch over to 3G. Republic Wireless is basically reselling Sprint’s mobile broadband service, so if you’re in an area with good coverage from Sprint you should get a strong signal from Republic Wireless as well.

If you’re on the phone when you walk out of your house, the phone should automatically switch from WiFi to 3G without ending your call, but there may be a pause.

There’s no word on on what kind of CUI will get you kicked off the network, but the company says you could talk on the phone for 550 minutes, send 150 texts, and use 300MB of data and still stay within the limits — and that’s assuming you never connect to a home WiFi network at all.

Republic Wireless promises never to charge overage fees or limit download speeds. But if your CUI does go too high you might be encouraged to use your WiFi network more… or leave.

In other words, the service is probably best for folks in the US that already have mobile broadband connections at home, spend most of their time using their phones near WiFi hotspots, and are looking to save money on their mobile plans. You’ll want to have an 80kbps data connection to make calls using Republic Wireless, and faster connections will offer higher voice quality.

While the monthly plans are dirt cheap by American wireless standards, there’s a fairly hefty startup fee. It costs $199 to get started — but that price includes an LG Optimus phone with a 3.2 inch LED display, Android 2.3 Gingerbread operating system, Swype keyboard, and Google Android Market.

The company describes the launch as a beta… so it might be a good idea to hold off on canceling your current phone service until you try out Republic Wireless first. As much as I like the concept of paying for a data-only plan and using VoIP, I suspect that service will be unreliable in some parts of the country or even in certain buildings in cities that do have strong coverage.

But there are no contracts, so users can cancel at any time.

via Android Police and TechCrunch