Smart Devices introduced a 7 inch Android tablet with a built-in projector last year, and now that the SmartQ U7 is available in the US, a handful of reviews are starting to pop up. While the basic tablet specs are nothing to write home about, GigaOm’s Kevin Tofel and TIME’s Jared Newman both seem moderately impressed with the projector, which lets you mirror your tablet screen on a wall or ceiling — assuming you’re in a relatively dimly lit room. 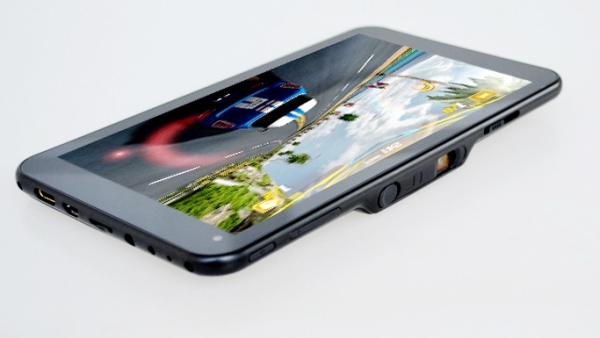 The SmartQ U7 has a 7 inch, 1024 x 600 pixel display, a TI OMAP 4 dual-core processor, and up to 8GB of storage. It runs Android 4.1 Jelly Bean, supports WiFi and Bluetooth, has a capacitive toucshcreen display, front and rear cameras, and a HDMI output.

But it’s the projector that really makes the tablet stand out. It features a tiny Texas Instruments DLP chip, and Smart Devices managed to add the projector without making the tablet all that thick or heavy. The tablet measures 7.9″ x 4.6″ x 0.56″ at its thickest point, and weighs less than 13 ounces.

The 35 lumen projector isn’t super bright. But in a room with the shades drawn you should be able to watch a video, read a website, or view a game shining on a wall. The dimmer your room, the brighter the image will look — especially if the tablet is far away from the wall.

Held about 6 feet from the wall, the SmartQ U7 projects an image that’s about 50 inches across, but you probably won’t see it very well unless you’re in a dark room. Move the tablet a bit closer to the wall and you can get a 40 inch screen.

Unfortunately, the projector only shines an 854 x 480 pixel image. So while you can sort of pretend you have a big screen TV, it’s not exactly a high-definition viewing experience.

In other words, it’s an interesting way to share the experience of gaming or watching videos without having people crowd around to stare at your 7 inch tablet screen. But honestly, everything will look much sharper on your screen than on the wall, which means if you don’t plan to use the projector often you could probably find a similar tablet for half the price.

Smart Devices sells the SmartQ U7 in two configurations:

You can also pick up the 8GB model from PandaWill for just $260.