HTC may be preparing to launch a whole range of new Android devices this year. Reports have already suggested the company is building Google’s next Nexus tablet. Now @evleaks reports that an HTC Android Wear watch is on the way as well as two more tablets. 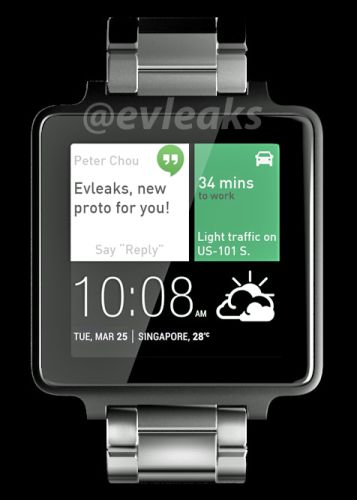 The Google Nexus 9 is expected to be an 8.9 inch tablet with an NVIDIA Tegra K1 processor. It’ll likely have a high-resolution display, stereo front-facing speakers, and it could launch this fall when Google releases the next version of Android, currently known simply as “Android L.”

We have fewer details about HTC’s other products, but if @evleak’s sources are to be believed, the watch will have a square face like the one in the concept image shown above and the tablets will be called the T7 and T12.

That could suggest they’ll have 7 and 12 inch displays, respectively. But the Nexus 9 tablet is apparently the HTC T1 Volantis or Flounder… which could suggest that the numbers don’t actually mean very much.

It’s been a while since HTC has released an Android tablet. The company’s HTC Flyer was one of the first 7 inch Android tablets to ship with a pressure-sensitive pen for writing or drawing, but the tablet wasn’t exactly a major commercial success story. It might have been ahead of its time though, as Samsung’s Note series products with digital pens seem to do pretty well these days.

There’s no word on whether the company’s new tablets will support pen input or have any other features which will help them stand out from the hundreds of other Android tablets already available.