Sony has been making smartwatches for a few years, but the company’s next model could be a bit different. According to a report from 9to5Google, the Sony Smartwatch 3 will be the first wearable device from the company to run Google’s Android Wear software.

Earlier this year Sony said it’d continue using its own custom version of Android for smartwatches instead of Android Wear… either the company’s had a change of heart, or it’ll take a cue from Samsung and offer a range of smartwatches that run different operating systems.

The Sony Smartwatch 3 isn’t expected to be the only new product Sony will unveil at the IFA show in Berlin this week. 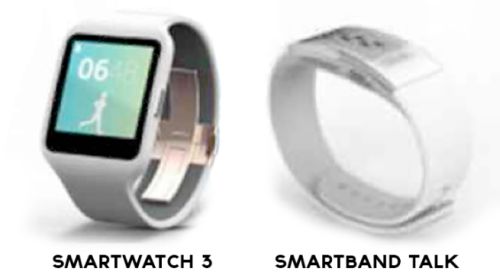 The Sony Smartwatch 3 is expected to feature a 1.68 inch, 320 x 320 pixel display and a water and dust resistant case.

Sony is also said to be introducing a new fitness tracker called the SmartBand Talk. It has a curved E Ink display, Bluetooth, and some sort of voice capabilities.

While the Xperia Z3 smartphone is probably the most impressive of the bunch, featuring a 2.5 GHz Qualcomm Snapdragon 801 processor, 3GB of RAM, a 5.2 inch full HD display, up to 2 days of battery life, and a water and dust-resistant case, I’m more intrigued by the Xperia Z3 Compact phone which has the same CPU and RAM, but a smaller 4.7 inch, 1280 x 720 pixel display.

Sony is one of the only companies that offers “mini” versions of its flagship phones that actually seem to have similar specs to their larger siblings, and not just a similar-looking case.