It looks like SNK is the latest company looking to cash in on the retro game console craze. While SNK may not be the household name that Nintendo and Atari are, gamers of a certain age will probably remember the company’s classic Neo Geo family of devices.

Initially designed for use in arcades, the key innovation of the Neo Geo was that a single cabinet could run up to 6 different games, and owners could change games by swapping out cartridges.

The company also releasd a home console system, but it was never as popular as those offered by rivals Nintendo and Sony.

Anyway, all of which is to say that SNK is reportedly planning to launch a Neo Geo mini that comes with about 40 classic games pre-installed. 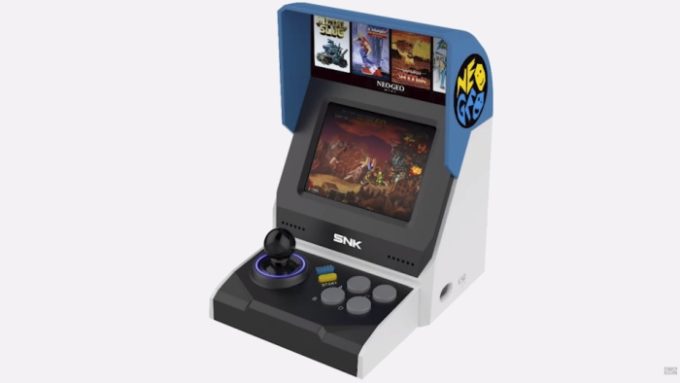 While SNK hasn’t officially revealed the device yet, YouTuber Spawn Wave has shared details and pictures that he says come from an anonymous source that would have good reason to have access to this kind of information.

Update: It’s official… but there’s still no word on the price or release date.

According to Spawn Wave, the system will be called the Neo Geo Mini and it basically looks like a tiny game cabinet, complete with a joystick and game buttons and a 3.5 inch display.

There’s also a headphone jack, a power jack (which looks like a USB Type-C port), and a power button on the back of the mini console.

It’s expected to come with a bunch of popular games including Metal Slug, King of Fighters, and Samurai Showdown titles.

There’s no word on how much the Neo Geo Mini will cost or when it will go on sale.

In the meantime, I guess you could always pass the time with a $25 Oregon Trail handheld game system.