Qualcomm’s first processor designed specifically for Windows on ARM computers is coming this year. But the upcoming Qualcomm Snapdragon 850 is basically an overclocked and slightly modified version of the Snapdragon 845 chip used in smartphones. Qualcomm says it should offer a 30 percent performance boost over the Snapdragon 835 chip used in the HP Envy x2, Asus NovaGo, and Lenovo Miix 630, but the company may have a much more powerful solution on the way.

According to a report from WinFuture, Qualcomm is already working on a Snapdragon 1000 chip set to be unveiled later this year. 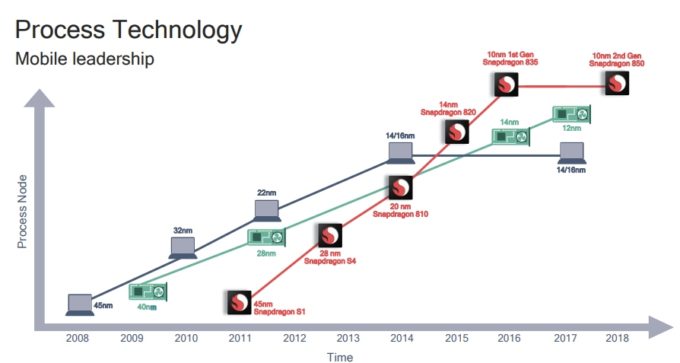 While there aren’t a lot of details about what to expect in terms of performance, the new chip is said to have a 12 watt TDP, which is nearly twice the 6.5 watt max TDP for the Snapdragon 850.

In other words, the Snapdragon 850 won’t be bound by the same thermal constraints as most of Qualcomm’s other chips, which makes sense since it’s not designed to be used in tight spaces like smartphones and ultrathin tablets. Instead, it’s designed for laptops and 2-in-1 tablets.

Doubling the TDP will probably bring big performance gains to the upcoming chips, but I can’t help wonder if they’ll eat into two of the advantages ARM-based devices typically have over Intel-powered machines: longer battery life and thinner, fanless designs.

That said, the new chips will almost certainly continue to have integrated 4G LTE modems and other features that could help set computers with Snapdragon chips apart. And hopefully the higher-power chips will be better equipped for emulating x86 architecture when running applications that haven’t been ported to run natively on ARM.

WinFuture reports that Asus is already working on a device with a Snapdragon 1000 processor, a 2K display, and WiGig support.

16 replies on “Report: Qualcomm Snapdragon 1000 could be a 12 watt processor for Windows 10 computers”