Ask your recent Android phone “Ok, Google, How old is Mick Jagger?” and it will answer you. Say “Ok, Google, take a picture” and it’ll fire up your camera app and get you ready to snap a photo.

But that could be the tip of the iceberg. According to the folks at Android Police Google is getting ready to bring its “Ok, Google” voice actions to just about every one of the company’s core Android apps.

There’s also a chance that an API could let third party apps tap into Google’s voice actions, but it’s not clear if Google will offer such an API yet. 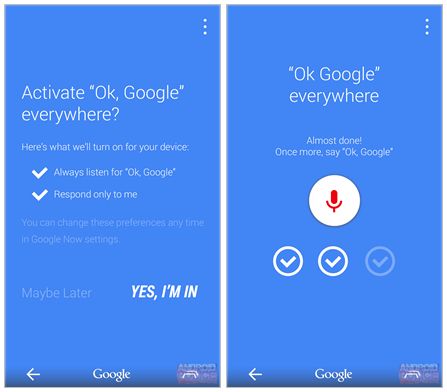 The idea is that in addition to using your voice to launch an app or search for content, you’d be able to use your voice to perform specific actions within apps.

For example, fire up the camera app and talk to your phone or tablet to share a photo or open the image editor. In some apps, Google could even provide a list of suggested actions when you say “Ok, Google,” much the way Google Glass users can see a list of available actions when they start talking to their eyewear.

The feature is currently going by the name of Ok, Google everywhere, but that could be subject to change… as could everything else in the Android Police Report — although the team has a pretty good track record of tracking down upcoming changes in Android apps and services.

Like many other recent Android services from Google, it’s likely that Ok, Google everywhere will not be part of the Android Open Source Project, which means that device makers will need to meet the Google Mobile Services requirements if they want to use the feature on their devices. The good news is that most Android phones and tablets sold these days meet those requirements (or they wouldn’t ship with Google apps such as Gmail, Google Maps, and YouTube).