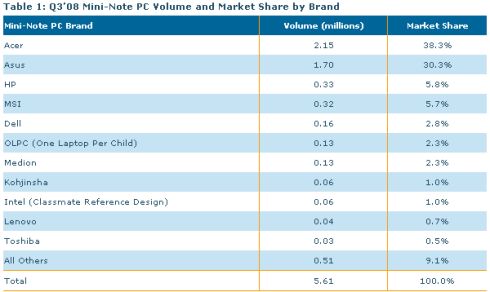 While notebook and desktop PC sales aren’t selling as well as anticipated, netbooks continue to be a growth market. According to a report from DisplaySearch, the market grew by 160% betwen the second and third quarters of 2008.

That number’s not particularly surprising, since the netbook market was born just over a year ago. While most of the top PC makers have a netbook in their lineup now, several of those companies have only recently released their entries, which means we’ll probably see netbook sales climb a bit higher over the next few quarters.

I didn’t shell out the cash for DisplaySearch’s full report. But one of the more interesting elements in the press release was the chart above, which shows the market share held by various mini-notebook manufacturers. We’d already seen that Acer was set to outperform Asus in the netbook space this year. But I find it a bit surprising to see just how much of the market belongs to Asus and Acer. I suspect HP, Dell, and Lenovo may do some catching up next year based largely on their name recognition. But some of those big names aren’t pushing their mini-laptop models very hard, likely due to to fears that low cost PC sales could eat into the sales of higher priced machines.