Amazon’s Echo is an internet-connected, voice-activated speaker that you control by talking to it. Google Home is a similar device, but it uses Google’s Asisstant voice service rather than Amazon’s Alexa. And Apple is said to be working on a Siri-based version.

But what about Microsoft? The company reportedly has its own solution on the way… but according to Windows Central, it won’t be a standalone speaker.

Instead, Microsoft Home Hub is expected to be new software that can turn any Windows 10 PC (with the right hardware) into a smart home hub. 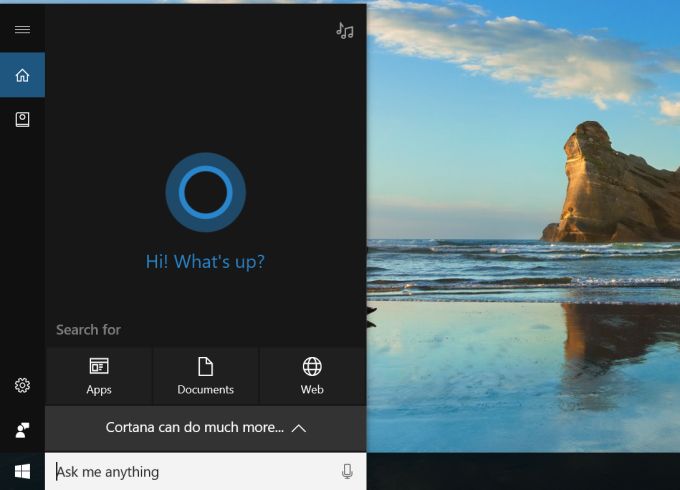 In a nutshell, Home Hub is a souped-up version of Microsoft’s Cortana voice assistant software plus multi-user features that will let you designate a PC as a device for use by the whole family. It’s expected to roll out in 2017, also some parts of the experience are already included in the upcoming Windows 10 Creators Update, which is already available to members of the Windows Insiders Program.

Right now you can set up multiple user accounts on a single PC, but switching between them or sharing data between accounts can be a bit of a hassle. Home Hub will let you set up a “family” account that everyone in a household can access no matter which user is logged in.

Imagine you’ve got an all-in-one Windows 10 PC in the living room or kitchen. It has Home Hub software, a family account, and accounts for each of the members of your household. Since one of the features rolling out with the Windows 10 Creators Update is the ability to interact with Cortana from the lock screen, you’ll be able to approach the computer and start talking to it without unlocking it… and it won’t matter whether you’re currently logged in or not.

Any shared calendar appointments or other data are available… and thanks to Windows Hello, you can also authenticate yourself quickly to access your private appointments, contacts, or other data without switching user accounts.

But since Home Hub is basically just software, you’ve also got a fully-functional PC. Want to jot a note with a digital pen and leave it for other members of the family to see? You can leave a virtual sticky note instead of posting it on the fridge.

The multi-user features seem like they could help set Home Hub apart from the competition. But I can’t help but wonder if people want to set up an always-on PC to act as a smart home hub with a screen and always-listening microphone when companies like Amazon and Google are banking on the simplicity of their voice-only solutions.

That said, there’s also a report out this week suggesting that Amazon may be working on a new model that has a touchscreen display. So maybe Microsoft isn’t the only company that figures a smart home hub could benefit from a screen.