Chinese chip maker MediaTek is planning to launch several new smartphone and tablet processors by year’s end. If recently leaked specs are anything to go by, the MT6795 will be one to watch.

The chip is expected to be a 64-bit, octa-core processor with clock speeds up to 2.2 GHz. 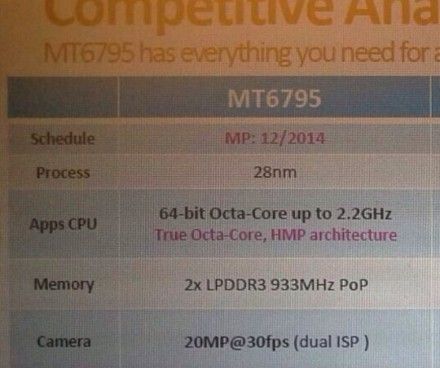 Other features include Imagination PowerVR G6200 graphics clocked at 700 MHz, support for 4K video playback and encoding at 30 frames per second in H.264 and H.265 formats, support for displays up to 2560 x 1600 pixels and cameras with up to 20 megapixel sensors.

The processor also includes support for HSPA+ and LTE and it’ll be paired with another MediaTek chip (MT663) for 802.11ac WiFi, Bleutooth, GPS, and FM radio.

According to a leaked product roadmap, MediaTek could launch the MT6795 processor around December, 2014. Other upcoming chips from the company include the slightly less powerful 1.7 GHz MT6752 8-core, ARM Cortex-A53 processor and the 1.5 GHz MT6732 quad-core ARM Cortex-A53 chip.

MediaTek’s chips are popular with Chinese smartphone and tablet makers, but a growing number of devices sold in the US from companies including Lenovo, Asysm and Acer also feature MediaTek processors.