Google’s next Nexus tablet may be a model with an 8.9 inch display and an NVIDIA Tegra K1 processor. Android Police reports that multiple sources have told them about the tablet, and they have a photo showing an early (and possibly inaccurate) image.

The tablet is said to be manufactured by HTC, and it’s due out some time in the fourth quarter of 2014, when it will launch alongside the next major version of Android (with a dessert-themed name starting with L). 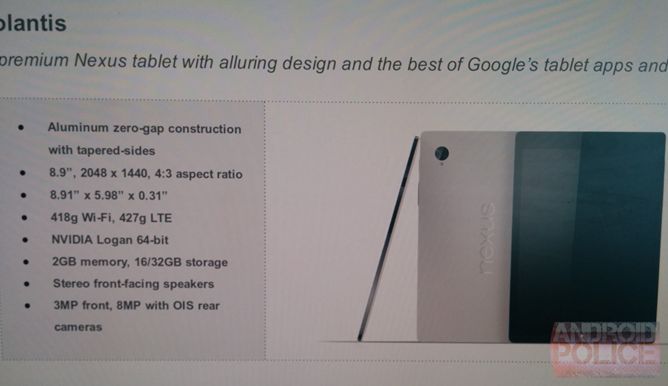 It’s said to be powered by the 64-bit version of NVIDIA’s Tegra K1 processor.

Google is rumored to be phasing out the Nexus program in favor of something called Android Silver, which would have a handful of smartphone and tablet makers offering Googley versions of their devices in the future. So the Nexus 9 could be one of the last Nexus devices… if it’s real, and if it launches this year.

29 replies on “Report: Google Nexus 9 is an HTC tablet with NVIDIA Tegra K1”