The Google-owned Waze app uses crowdsourced data to help you avoid traffic slowdowns. A community of Android and iOS users share information about accidents, road closures, and police traps, among other things, and Waze helps you plot the best route to avoid getting stuck on the road.

But Google has also started utilizing Waze in a few other ways. Some of the data from Waze is now used in Google Maps. And Israeli users can also use Waze as a ride-sharing service, allowing riders to hitch a ride with drivers going in their direction (for a fee).

Google has also been running a limited ride-sharing trial in San Francisco, and now The Wall Street Journal reports the company is getting ready to expand that trial, potentially making Waze into more of a rival to ride-sharing services like Uber and Lyft. 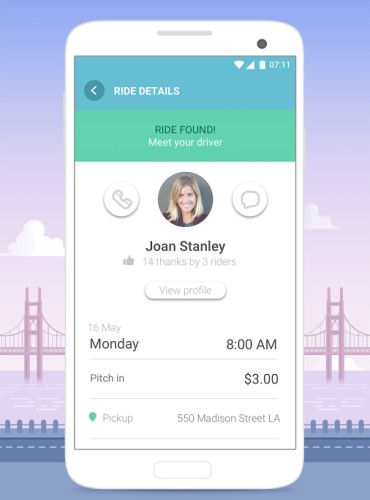 Right now anyone in San Francisco can sign up through Waze to be a driver, but during a limited test period only about 25,000 people have had the opportunity to be a rider.

Sources tell the Wall Street Journal that Google plans to open up ride sharing to everyone in the San Francisco area.

Eventually the technology could enable something even more ambitious: instead of getting a ride from a human being you might eventually be able to use Waze or another Google app to hail a driverless car. One vision for the future of Google’s autonomous vehicles is a fleet of taxis that never need to park: they just pick up and drop off passengers until it’s time to recharge or refuel.

The Waze ride sharing service is expected to operate a little differently than Uber or Lyft. According to the report, Google plans to set prices much lower, which would potentially discourage people from becoming full-time drivers, but encourage them to go a little out of their way to pick up passengers traveling in the same direction… creating more of a carpool-with-strangers kind of system than a taxi-like service.