Google has a complicated history with communication applications. The company has introduced, lost interest in, and killed enough that I’ve kind of lost count. So it was kind of nice when Google Hangouts launched in 2013 with features taken from three earlier apps (Google talk, Google+ Messenger, and Hangouts video chat). 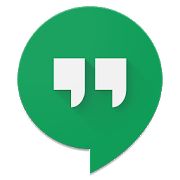 Now it looks like Hangouts may be on the way out.

According to a report from 9to5Google, Hangouts could shut down in 2020.

Update: Google says it’s not so much shutting down Hangouts as transitioning users to a new version. See below for more details.

The move shouldn’t be a surprise for anyone who’s been paying attention. last year Google announced it was shifting the focus of Hangouts to enterprise.

Since then Google has continued to offer a free version for consumers, but it clearly hasn’t been a high priority for the company. The company has another chat app called Allo, but it’s not particularly popular. And Google has been trying to push RCS (Rich Communication Services), a newfangled set of features for SMS.

It’s unclear what the future holds for folks who’ve been using Hangouts since before it was called Hangouts.  I have a few contacts that I communicate with almost exclusively via Hangouts, either on my phone (thanks to the Android app) or on my laptop (thanks to the Hangouts widget built into the Gmail web app).

If 9to5Google’s source is correct, it looks like we’ve got a year or two to come up with an alternative.

Update: Googler Scott Johnston has weighed in on Twitter, saying the company hasn’t made a decision “about when Hangouts will be shut down” and that users “will be upgraded to Hangouts Chat and Hangouts Meet,” the text chat-based app and video-chat app aimed at enterprise users that Google introduced last year.

Hey @hallstephenj, I run Hangouts and this is pretty shoddy reporting. No decisions made about when Hangouts will be shut down. Hangouts users will be upgraded to Hangouts Chat and Hangouts Meet. Your source is severely misinformed. You can do better.

Update 2: Google released a statement explaining that at some point Hangouts users will be migrated to Hangouts Chat and Hangouts Meet, but the timeline for that change hasn’t been announced yet and the existing version of Hangouts will continue to be supported until then:

Update 3: Google says Allo is going away. Hangouts users will eventually be able to use Hangouts Chat and Meet. And it’s continuing to invest in Messages and Duo.

25 replies on “Report: Google Hangouts will stop hanging out in 2020 (Update: sort of)”