Over the past few days I’ve published nearly 100 articles, 29 videos, and more photos than I care to count while covering the latest tech on display at the Consumer Electronics Show.

As in previous years, I did most of this with the help of just a few tools: a laptop, a smartphone, and a camera. But I brought a new phone, a new laptop, and a newish camera with me this year, So how did everything stack up? 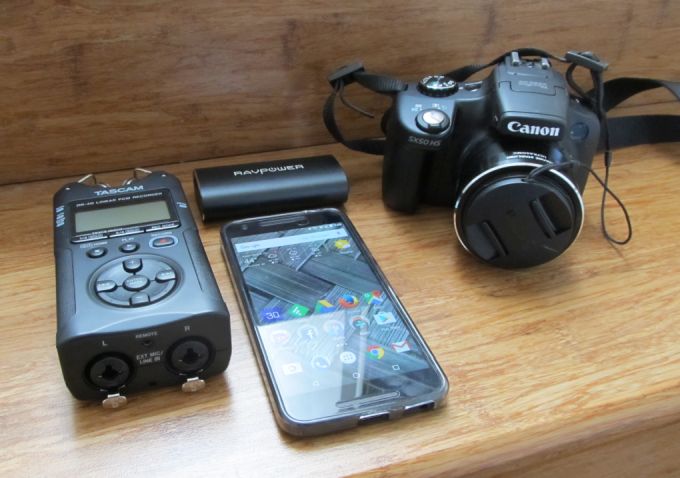 Another important concern is to pack light, because when I leave my hotel room in the morning, whatever’s in my backpack is what I’ll have to lug around all day, sometimes until after midnight.

While my backpack wasn’t quite as light as I would have liked it to be, stuffing it with an Acer Aspire S13 laptop and charger, a Canon PowerShot SX50 camera, and various odds and ends (including snacks, water, and my jacket, when I’m working indoors) didn’t give me any serious back pain. So that was a win.

The Aspire S13 is about half a pound heavier than the Samsung Series 9 notebook I’ve used to cover CES in previous years, but I didn’t really notice the difference. And since the laptop gets up to 7 hours of battery life, I was able to leave the spare 1 pound battery I’d been using with the Series 9 at home. I did keep a laptop charger with me at all times though, just to be on the safe side.

Last week I’d speculated that I might use the Canon camera just for shooting video, while using my Nexus 5X smartphone for still photos. I ended up actually using both cameras over the course of the week. I suspect you’d have a hard time telling which pictures posted to Liliputing came from which camera.

I did find that the Nexus 5X was better at quickly focusing on a specific area in a close-up shot, and I had an easier time adjusting the lighting settings. But the reason I didn’t use the phone as my exclusive camera is that it takes two hands to get those focus and lighting settings set up: one to hold the phone, and the other to interact with the touchscreen controls.

So if I want to take a photo of an item I’m holding in one hand, I’ve only got the spare hand to operate the camera. The PowerShot SX50 was generally easier to use this way.

All videos were shot using the Canon camera. That’s because the camera has optical image stabilization and an SD card reader, making it easy to shoot videos that don’t bounce up and down too much and to quickly transfer them to a computer without a USB cable.

I usually also carry around a pad of paper and a pen to jot notes about the items I’ve seen. My handwriting is so bad that even I can barely read it, but these notes usually help jog my memory when I get a chance to sit down and write about the products I’ve photographed. But I accidentally left my paper and pad at an event early in the week.

Rather than look for a replacement, I decided to just take notes on my phone. Text input is a bit slower this way, and I generally have to look at the screen while typing, which means I may not be able to look at the person I’m speaking to. But the upside is that I could actually decipher words that I’d written.

And that’s about it for the gear I used.

I also brought a Tascam DR-40 digital audio recorder in case I wanted to do any on-the-spot interviews for the LPX Podcast, but it stayed in my bag the whole time. So did the RAVPower 6,700 mAh portable battery. It’s not that my Nexus 5X was able to last a full day without charging. It’s just that I usually had an opportunity to charge it while sitting down to write a few times a day.

Speaking of the Nexus 5X, this is also the first month that I’ve been a Google Fi customers. The service worked pretty well in Las Vegas. I connected to WiFi whenever possible in order to save data, but I was able to get a decent data signal whenever WiFi was unavailable. And I had no problems tethering my laptop to my phone. That’s how I covered the Asus press conference in real-time: my phone was acting as a modem.

The only issue I had with Fi was relate to voice, rather than data. Twice I attempted to make calls while walking from one location in Las Vegas to another,and had the calls drop on me. I suspect this might have had something to do with Fi trying to switch between cellular and WiFi networks, but I can’t be certain.

So while data is pretty reliable, I’m less convinced about the voice service. But since I use my phone primarily for data, I can live with the occasional voice glitch… as long as it stays occasional.

And finally, I’m happy to report that I’m heading home without any sign of the annual CES flu or any other maladies. I got a flu shot in October, which may have helped. I thought I felt a sore throat coming on when I arrived, so I’ve been sucking a few Cold-Eeeze lozenges a day and drinking lots of fluids to stay on the safe side. And in addition to using a travel humidifier whenever I’m in my hotel room, I followed Allan’s advise and picked up a cheap saline nasal spray which I squirt before bed.