BlackBerry’s first smartphone running Google Android software could hit the streets in November. Concerned that it won’t feel like a BlackBerry device without BlackBerry OS? Don’t worry: it’ll have one of BlackBerry’s other signature features: a physical keyboard.

The phone is reportedly code-named the BlackBerry Venice, and we’ve been hearing rumors about the phone for a while. Now Evan Blass has posted a series of details about the upcoming phone. 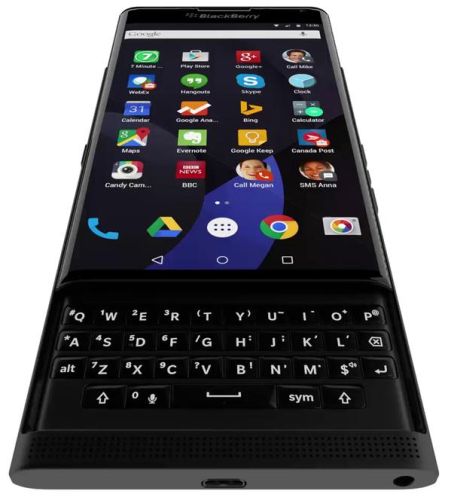 First up, Blass says the Venice will be available in November from AT&T, Sprint, T-Mobile, and Verizon.

He followed up that message with an image showing what the phone looks like when you extend the slide-out keyboard from behind the screen (see above).

The phone appears to have a large touchscreen display, a stock Android user interface with on-screen home, back, and recents buttons, and shortcuts for contacts mixed in with app icons. While phones running recent versions of BlackBerry OS can run some Android apps, the Venice should be able to run most Android apps, and comes with the Google Play Store and other Google apps including Chrome and Drive pre-installed.

Want an even closer look at the phone? Blass posted this short video that shows the sides, back, keyboard, and camera (with optical image stabilization):

BlackBerry probably won’t give up on its own operating system anytime soon. But the company has been working to bring its suite of communication and security apps to Android, iOS, and Windows phones, so it’s not a huge shock to see the company preparing to launch its own phone running one of those operating systems. If the BlackBerry Venice is a commercial success, don’t be surprised if we see more Android phones from the company in the future (and perhaps fewer BlackBerry OS phones).

Update: Blass has shared another image showing that while the phone will run Android software, it will come with a series of BlackBerry apps including a BlackBerry software keyboard, calendar, BlackBerry Messenger, tasks, notes, contact, and other apps. It’ll also include and Android version of BlackBerry Hub. Oh, and here’s what the sliding mechanism looks like in action: