Most smartphones and tablets support multi-tasking… to the extent that you consider the ability to listen to music from one app while looking at a different app in the foreground such as a web browser to be multitasking.

But if you want to actually see more than one app on your screen at the same time, you’ll either need a Windows tablet or an Android device from Samsung, LG, or another company that’s tacked its own multi-window features on top of Google’s operating system.

Google may be working on adding native support for multi-window features to Android though. The folks at Android Police have obtained information about Google’s efforts to bring multi-window support to Android. 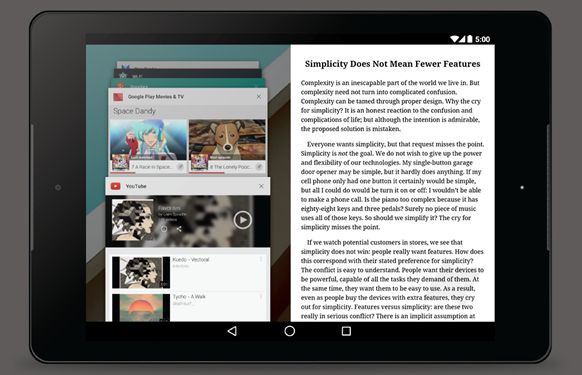 The report doesn’t claim that Google actually plans to add multi-window support to any future version of Android. Instead it looks at an implementation Google was experimenting with late last year and early this year. The software may have evolved since then… or it may have been scrapped altogether.

You could then open a second app by swiping it to the other side of the screen, allowing you to have two apps open at once.

Whichever app you’ve tapped more recently would be the app in focus, so if you want to use the back button you’ll need to make sure you know which app is in focus before figuring out which app will be affected.

You don’t have to divide the screen down the middle: apps can also be resized to take up a smaller portion of the screen. If an app is sized at 25 percent, for instance, it could display the smartphone interface even if you’re using a tablet.

Android Police has more details and graphics showing how the multi-window feature would work. While there are a handful of Android devices that include limited support for viewing more than one app at a time, it’d be nice to see it backed into the core operating system in a way that would allow any Android app to work.

3 replies on “Report: This is how Android multi-window apps could work”