Google’s Android operating system may be open source — but the version of Android that runs on most phones, tablets, and other devices includes proprietary, closed-source components. While most Android users would probably rather have 3D graphics and GPS than a 100-percent open source operating system, there’s an alternative for folks willing to sacrifice functionality for their ideals. 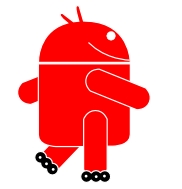 Just don’t expect everything to run.There’s no support for 3D graphics on any of those devices. 2D graphics are slow on most models. And GPS is a non-starter. You can’t even use WiFi on most devices unless you install non-free firmware, and on many devices the camera isn’t working.

You can find a list of what’s supported and what isn’t at the Replicant wiki.

Since Replicant doesn’t include closed-source software it doesn’t feature the Google Play Store or other Google apps such as Maps, YouTube, or Gmail. Instead it comes with the F-Droid catalog of free and open source software.

Sure, Replicant might not be as functional as Android… and the Android 4.2-based build is launching months after Google released Android 4.4. But it’s kind of impressive that Replicant exists at all. There’s currently only one active developer working on the project, although that could change in the future.

8 replies on “Replicant 4.2 is Android Jelly Bean without the closed source bits”