Ultrabooks are slim notebooks with Intel processors that, among other things, tend to measure less than eight tenths of an inch thick. While many ultrabooks are thin, light, and reasonably powerful laptops, there’s not a lot of room in such a svelte laptop case for things like user-upgradeable memory or storage or replaceable batteries.

So most laptop makers leave those features out of ultrabooks.

That doesn’t mean you can’t perform some minor surgery yourself though. 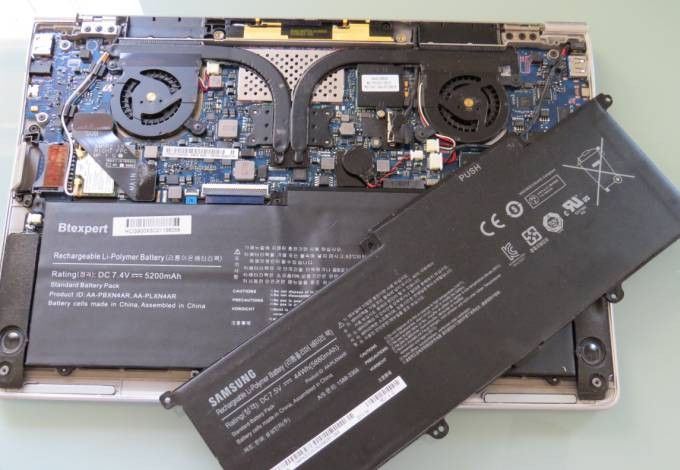 I picked up a Samsung Series 9 ultrabook in 2012 and I’ve been pretty happy with the way the 2.4 pound notebook has held up… except for the battery. The laptop used to run for up to 6 hours on a charge. Now I’m lucky if I can squeeze 2.5 hours of run time out of the built-in battery.

A while ago I bought an external battery pack which can more than double the laptop’s battery life. But that battery weighs about a pound and gives me yet another item to keep charged.

So I decided to open up the case of my laptop and see if the battery could be replaced… and it turns out it can.

Note that while many laptops have batteries that can be pulled out and replaced in a matter of seconds. Replacing the battery on the Samsung Series 9 is a bit more complicated: you have to remove 10 screws from the back of the case and then remove 5 more screws holding the battery in place.

Once that’s done though, you can easily slide out the battery and put in a new one.

This won’t let me keep a spare battery in my bag and swap them out on the road. But it did let me replace my dying battery with a fresh one which should offer at least twice as much run time. And that can help me hold onto this aging laptop a little longer.

Samsung doesn’t sell official battery replacements for this model, so I had to pick up a third-party battery. I found one at Amazon for about $40. That’s a lot less than the price of a new laptop, so if this replacement battery lets me hold onto my Series 9 for another year or two it could save me some money. By the time I’m ready for a new laptop, hopefully I’ll be able to either get a model that’s significantly better than what’s available today for the same price… or get an older laptop at a deep discount.

Keep in mind, not every ultrabook will be easy to open up with just a screwdriver, and not every ultrabook will have a battery that’s so easy to replace. But if, like me, you find that it is possible to open up the case and slide out the battery, it might be worth searching to see if there’s an affordable way to order a replacement battery as a way to breathe a little new life into an older ultrathin notebook.

Another thing to keep in mind? You may be on your own if you break your device while performing this sort of operation. If your laptop doesn’t come with an easily user replaceable battery, odds are your warranty won’t cover any damage resulting from an attempt to replace it yourself.