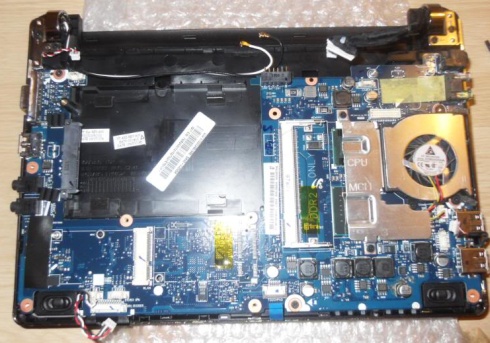 The biggest difference between a desktop and laptop computer is undoubtedly the fact that one is portable while the other is chained to your desk by power cables, external monitors, keyboards, and other peripherals. But one of the other big differences between desktop and laptop computers that’s always bugged me is just how much easier it is to open up and repair or upgrade a desktop. Still, that doesn’t mean it’s impossible to do some pretty major work on a laptop, as a member of the SammyNetbook forums showed recently.

He had to replace his Samsung NC10 netbook’s motherboard, so he took some photos and posted step by step instructions for anyone looking to do the same.

The Samsung NC10 is a 10 inch mini-laptop that was launched in 2008. At the time it was one of the most popular netbooks among enthusiasts, thanks to the fact that it offered better battery life than almost any other netbook on the market as well as a decent keyboard, display, and a case with a little flair thanks to some chromed elements around the edges.

Samsung has released several generations of netbooks since introducing the NC10, but it’s good to know that people who picked up the company’s first netbook can keep it alive and ticking even if something as fundamental as the motherboard needs to be replaced.

The instructions should also come in handy if you need to replace the hard drive, wireless card, or other components. Those are the sort of modifications we’ve seen netbook users making pretty much since day one. But replacing the entire motherboard takes a little more bravery. It also probably voids your warranty.