Jide may be pulling the plug on the consumer version of its Remix OS Android-as-a-desktop operating system project. But the rival team behind Phoenix OS is still hard at work.

After releasing Phoenix OS 2.0 earlier this year, the team has pushed out a second version of Phoenix OS based on Android 7.1 Nougat.

Phoenix OS 2.1 is available for download in 32-bit and 64-bit versions, and you can either grab an EXE file for installing Phoenix OS on a Windows computer or an ISO if you’d prefer a disk image. 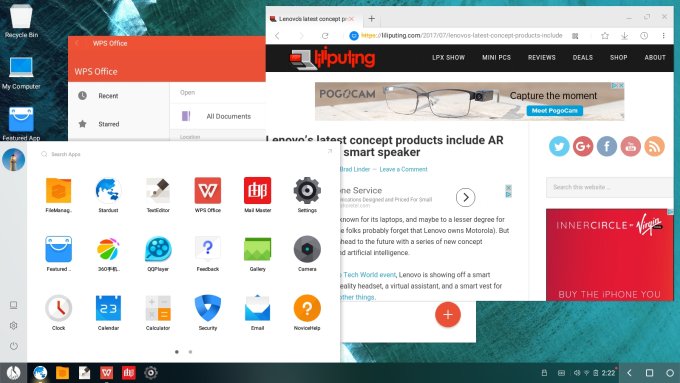 Phoenix OS is designed to be installed on a PC rather than a smartphone or tablet, and it basically looks like a cross between Windows and Android. There’s a taskbar, desktop, and start menu instead of a home screen and notification drawer. You can view notifications and other settings by tapping the icons in the bottom right side of the screen. And the home, back, and recents buttons are all the way on the bottom right side of the screen.

You can run apps in full-screen mode or in resizeable windows that you can position anywhere on the screen. Not all Android apps are really optimized for desktop use or mouse and keyboard input. But that’s where the keyboard mapping feature comes in.

It lets you opt to use keystrokes in lieu of button presses for certain actions in games and other applications to emulate an on-screen gamepad experience.

Phoenix OS 2.1 includes a number of bug fixes and improvements including better hardware compatibility, an updated keyboard mapping feature, and the ability to remember window resizing settings after you reboot.

If you’re already running an older version of the operating system, an over-the-air update is expected to start rolling out on July 24th. But you can download the installer or ISO from the Phoenix website now.