The Jide Remix Mini is a tiny, low-power desktop computer that runs a custom version of Android called Remix OS. You can download and run just about any app available from the Google Play Store on the Remix Mini, but the operating system has been tweaked to look and feel like a desktop OS. 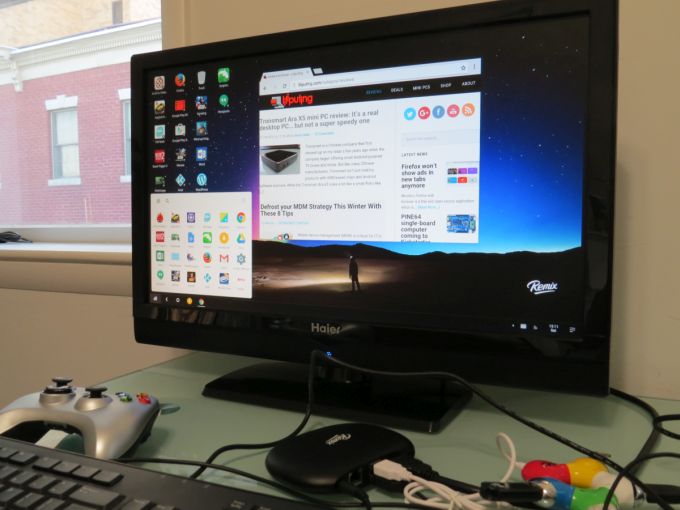 There’s a taskbar, a desktop, system tray, and custom apps including a file manager and settings utility. Probably the biggest difference between Remix OS and stock Android though, is that Remix OS lets you change the size and position of apps so that you can view and interact with multiple apps at once.

Jide’s first device to ship with Remix OS was a $399 tablet that launched earlier this year. Several Chinese device makers have also started shipping products with the software. But with a $70 price tag, the Remix Mini is the most affordable Remix OS device to date.

After a successful crowdfunding campaign this summer, the Remix Mini is now available for $70.

Jide sent me a demo unit to test, and while I’m not entirely convinced I want to use Android as a desktop operating system, the Remix Mini does feel more like a desktop PC than just about any other Android box I’ve tested to date.

Now that I’m done testing the Remix Mini, it’s time for a giveaway.

This contest is for a model with 2GB of RAM, 16GB of storage, and a quad-core Allwinner ARM Cortex-A53 processor. it has two USB 2.0 port, HDMI, Ethernet, microSD card, and headphone ports and supports 802.11n WiFi and Bluetooth 4.0.

In order to win, just follow the instructions in the widget below. Please note that this contest is open to residents of the continental United States or those with a valid US shipping address.


Thanks again to Jide for providing us with this review unit!

Update: This contest has now ended. Congratulations to our winner, Michael S!