Those represent discounts of $20, $30, and $50, respectively… and it’s worth pointing out that even at their normal prices, these tablets represent some of the best bang for your buck in terms of specs, support, and build quality at an affordable price.

Of course, there’s one down side: the tablets ship with Amazon’s Fire OS, which is based on Android… but which doesn’t include the Google Play Store. That means out of the box you have access to a lot less apps than you would if you were using a typical Android phone or tablet. But there’s a workaround. 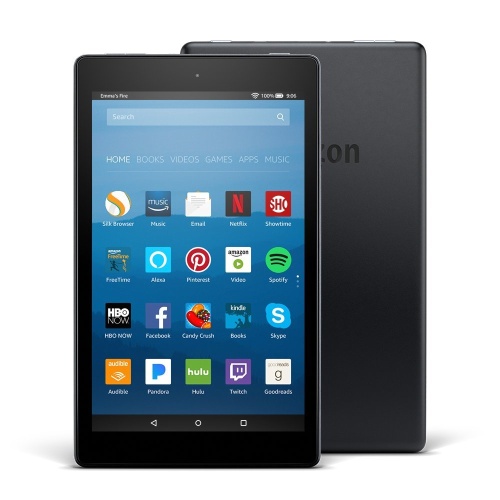 I picked up an Amazon Fire HD 8 earlier this year (when it was also on sale for $50), and thanks to some help from the xda-developers forum, I found out that it’s pretty easy to install the Google Play Store and other Google apps and services on the tablet (including YouTube, Google Maps, Google Play Books, and Google Play Movies & TV).

In a nutshell, all you need to do is go into the tablet’s settings and enable installation of apps from unknown sources, then install 4 Android APK files to get Google Play up and running.

That got a little more complicated recently, because when Amazon rolled out Fire OS 5.6.0 it introduced a bug that makes it look like you can’t install apps from unknown sources. But there’s a simple workaround: launch the installer, then hit the power button to turn your screen off. Hit it again and the “install” button should change from grey to orange and allow you to proceed.

Anyway, I’ve tested the installation of the Play Store on my Fire HD 8, but the same steps should work on the 7 inch Fire tablet and the Fire HD 10. You can find step-by-step instructions in our guide:

For what it’s worth, if you’re reading this on Black Friday or Cyber Monday, while the $30 Fire 7 tablet looks like a great deal, I think the $50 Fire HD 8 and $100 Fire HD are even better deals. Not only do you save more money, but you get higher resolution displays, more RAM, and more storage space for not much more money.

14 replies on “Reminder: You can install Google Play on Amazon’s Fire 7, Fire HD 8, and Fire HD 10 tablets (on sale for Black Friday and Cyber Monday)”