The device is a sort of cross between an eReader and a tablet, designed for taking notes, drawing sketches, or reading documents, among other things. ReMarkable plans to begin shipping the writing slate in the summer of 2017, but it goes up for pre-order for $379 today. 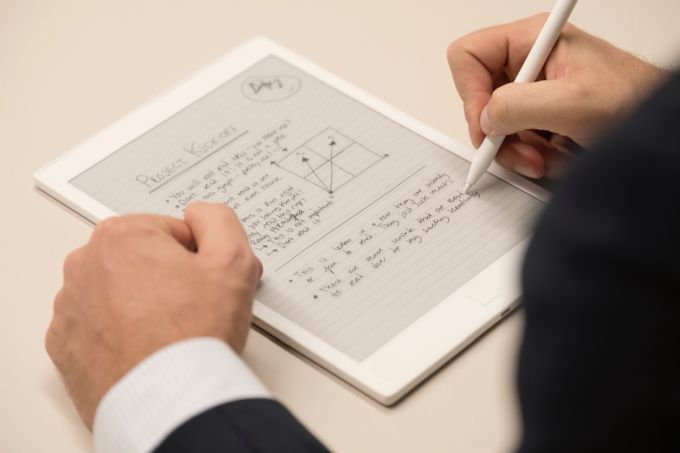 This isn’t the first time we’ve seen a company attempt to bring a writing slate to market. A few years ago a concept called the Noteslate generated a bit of buzz, but after years of development, that company has yet to actually ship a product.

Unlike that project though, reMarkable is fully funded and doesn’t require a crowdfunding campaign to raise money before producing hardware. I’m told the reason the pre-orders are going live half a year before the device ships though, is to get a bit of publicity for the product before it ships. I may be falling for it… but the concept certainly looks interesting, even if it’s a niche product.

The reMarkable table has a 1872 x 1404 pixel screen with 226 pixels per inch. It’s a plastic display rather than glass, to make the device harder to break.

Customers who preorder the slate will get a folio cover and a pen. The full retail price for the tablet will eventually be $529, with the cover and pen selling for $79 each. Neither will be bundled with the tablet at that point, even though it seems silly to buy a device like this without the pen.

It measures 10.2 ” x 6.9″ x .26″ and weighs about 12 ounces, and the company says it has “paper-like surface friction” for comfortable use with a pen. The device features a tilt detection sensor for screen rotation and reMarkable says the screen has 55ms latency for quick response from pen input.

There’s a 3,000 mAh battery, which is much larger than those found in a typical eReader, and you can recharge the tablet with a micro USB cable.

The tablet has a 1 GHz ARM Cortex-A9 CPU, 512MB of RAM, and 8GB of storage and supports WiFi. There is no SD card slot.

The slate runs a custom Linux-based operating system called Codex and supports PDF and ePUB documents, among other file formats.