In addition to the flagship specs you’d expect (more or less), the phone has a “holographic” display for glasses-free 3D effects, support for upcoming modular add-ons, and an unusual, rugged design with a Kevlar back and ridged sides.

Is it worth the asking price? That depends who you ask. 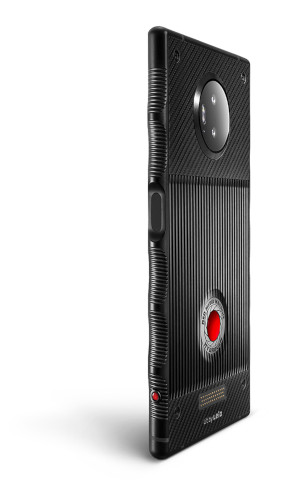 The RED Hydrogen One features a 5.7 inch, 2560 x 1440 pixel LCD display with support for 3D visuals and a Qualcomm Snapdragon 835 processor (which was one of the best chips available when the phone was announced, but which seems a little dated for a high-end phone today).

Measuring 10mm (about 0.4 inches thick) and weighing 263 grams (about 9.2 ounces), the phone is on the thick and heavy side. It’s not waterproof and lacks wireless charging support. But at least the phone has a headphone jack.

Early reviews are in, and it sounds like the “4V” or “holographic” display is certainly one of the most interesting things about the phone. Instead of a stereoscopic 3D display which displays two images at once in a way that allows you to see more depth when you shift your view, the RED Hydrogen One shows four pictures, hence “4V.”

Rather than making it appear that images are popping out of the screen as you might expect from the world “holographic,” though, reviewers say it feels like you’re looking into the screen to see 3D imagery that extends past the back of the phone.

It may be one of the best glasses-free 3D systems to date. But unfortunately 3D content necessarily looks more blurry than 2D imagery.

There’s also a limited amount of 4V/holographic content currently available. You can access some movies and videos from RED, and users can capture 4V content using the phone’s dual camera systems and share it online. But unless this phone becomes massively popular, odds are that you’re going to be sharing content with the relatively small number of folks willing to shell out $1,295 for their own Hydrogen One phones. If you want to show your 3D videos to friends or family you’ll probably have to do it using your phone’s screen rather than by sharing via Facebook or Instagram.

If the phone has a selling point beside the holographic display, it’s probably the camera system. After all RED is first and foremost a camera company.

But for now it seems like the phone’s cameras are… adequate for general purpose tasks. Reviewers say they can take some decent shots, but they’re not exactly best-in-class.

But… the phone has a set of pins on the back that will theoretically allow you to attach modular add-ons including cameras with RED image sensors and support for interchangeable lenses. That could be the feature that would truly make this phone stand out… if and when RED actually releases those modules. Right now you can’t buy any.

Until then, it sounds like the Hydrogen One is a phone with a better version of the glasses-free 3D trick that Amazon hoped would make its Fire Phone stand out… until Amazon realized that nobody was interested in buying a phone whose only stand-out feature was a kind of useless gimmick.

It’s also not clear what benefits, if any, there would be to buying a RED phone + camera module + lenses instead of just buying a cheaper smartphone and paying separately for a RED camera.

You can read more about the RED Hydrogen One in reviews from The Verge, Android Police, Droid Life, Digital Trends, Tom’s Guide, Neowin, TechCrunch, and Gizmodo. Opinions on whether this is a good phone vary pretty widely — among sites that give number scores, Neowin gave the Hydrogen One an 8 out of 10, while The Verge gave it a 3 out of 10. Tom’s Guide was in the middle with 3 out of 5.

So you might want to read a bunch of reviews before pulling out your wallet to order one on Friday.