Pebble was one of the early players in the smartwatch space, and the company’s low-power devices with long battery life, support for third-party apps, and sunlight readable displays still have a loyal fan base… even though Pebble hasn’t released a new watch since the company was acquired by Fitbit at the end of 2016.

At the time, Fitbit promised to continue supporting Pebble services through the end of 2017, and the company recently announce it would extend that date by another 6 months.

But come June 30th, Pebble users won’t be able to use the Pebble app store, reply to SMS or email messages, or use voice recognition, among other things.

Or at least, you won’t be able to do those things using Pebble/Fitbit’s servers. But a group of third-party developers is hoping to have their own alternative in place by the time Fitbit pulls the plug on Pebble’s servers. 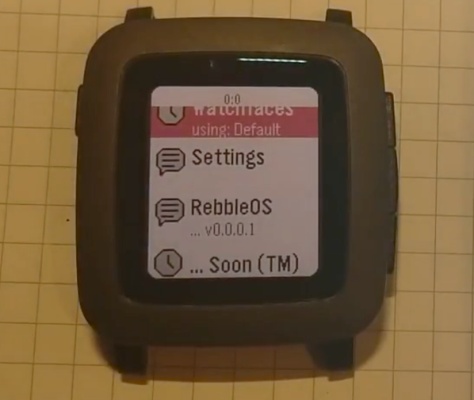 A project called Rebble is underway, with developers working to build new firmware that can run on Pebble hardware, a new app store, and new mobile applications.

There’s already a work-in-progress, open source operating system called RebbleOS that’s based on FreeRTOS and which should eventually be compatible with apps designed for Pebble OS. The goal is to also make sure it’s compatible with Android and iOS smartphone apps designed to work with Pebble.

RebbleOS is still in the early alpha stages, but an update posted to the project’s website this week notes that Bluetooth is now working, allowing notifications to be beamed from a phone or PC to a device running RebbleOS. Some Pebble watch faces also work with the unofficial firmware.

At this point RebbleOS is still pretty power-hungry and a watch using the alternate firmware will reportedly only last for about 6 hours. There’s obviously a lot of work to do to make RebbleOS a real alternative to Pebble OS… and even once that happens, it’s not clear if developers will be willing to bring their existing Pebble apps to a new app store.

One of the fascinating things about this project is that there will never be new Pebble hardware, so the developers are basically building a new operating system and software ecosystem for a dead-end platform, albeit one with a pretty strong fan base.

But if the Rebble team succeeds in building a fully functional, Pebble-like operating system that’s compatible with Pebble hardware, there’s nothing stopping a new company from coming along and using the software to power new hardware with Pebble-like features. Maybe you’ll eventually be able to buy a smartwatch with week-long battery life again one day.

Update: Rebble isn’t the only project designed to keep Pebble hardware functional after Fitbit pulls the plug on cloud services. Gadgetbridge is an open source application that lets you use Pebble watches (and several others) without relying on cloud services. It’s designed to run on an Android device that you can pair with your smartwatch via Bluetooth. thanks for the heads up M Bardland!