Reaper is a powerful, versatile digital audio workstation for editing music, podcasts, or other audio projects. I’ve used it to edit and mix every single episode of the LPX podcast and Loving Project podcast.

The software is also cross-platform. There 32-bit and 64-bit builds available for Windows and macOS, and there’s been an experimental Linux version for a few years.

Now it’s easier than ever to give Reaper a try on Linux. While it’s still described as “experimental and unsupported,” starting with Reaper v5.93, there’s an official Linux installation script that you can use to set up the software on computers with i686, x86_64, or armv7l chips (including some Raspberry Pi models). 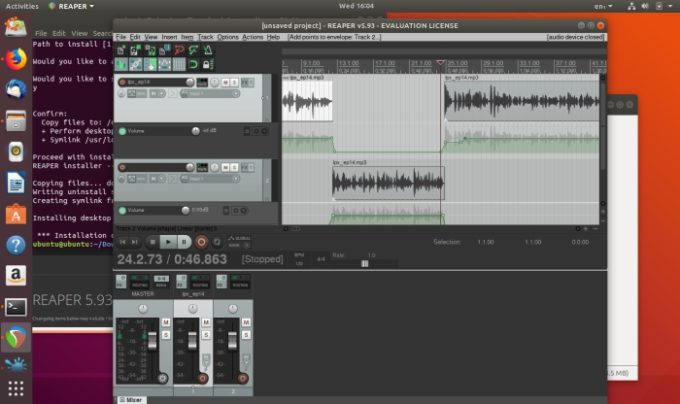 For the most part Reaper for Linux looks just like the Windows version of the software. Reaper supports multi-track recording and editing, offers a variety of tools for editing, mixing, and exporting. And supports a bunch of first-party and third-party plugins.

But there are some known issues that only affect the Linux version, and you may have to search for native plugins, although there are some third-party workarounds that may allow you to use WINE so that Windows plugins will work with Reaper on Linux.

I generally find Reaper to be at least as capable a tool for audio journalism and podcasting projects as Pro Tools or Adobe Audition. But it’s substantially more affordable: you can try the software for free for up to 60 days, pay $60 for a non-commercial license, or $225 for a commercial license.

Note that the software is exactly the same no matter which license you buy: Reaper basically uses the honor system and asks anyone who makes more than $20,000 per year from their audio production work or otherwise uses the software in a professional capacity to pay a bit more.

Reaper for Linux is still a bit on the buggy side for me to recommend buying a commercial license if that’s the only operating system you plan to use the software on. But it’s nice to see that the Linux port is coming along.

You can read more about Reaper for Linux in the Reaper forums.