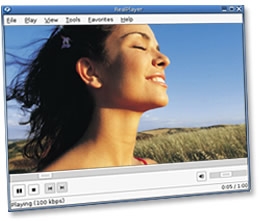 RealNetworks is announcing a deal that could bring the company’s RealPlayer software to a number of Linux powered netbooks. The company is partnering with Ubuntu to bundle a Linux version of RealPlayer mobile with Ubuntu Netbook Remix.

RealNetworks is also working with three companies that offer an “instant on” environment for netbooks that lets you run a handful of applications a few seconds after hitting the power button on your PC without waiting for the computer to boot Windows or another full desktop operating system. Phoenix Technologies (the makers of HyperSpace), DeviceVM (the folks behind SplashTop), and Xandros (which has its own Presto quick boot environment) have all agreed to use RealPlayer Mobile.

So what are the advantages of RealPlayer Mobile? Well, the software does include codecs for handling most popular media files. But so does the open source VLC media player. It will also be able ot handle HD video playback on netbooks with hardware acceleration. But RealNetworks’ Rishi Mathew tells ComputerWorld the big advantage is name recognition. When most computer users pick up Linux for the first time, they’re struck by the fact that it doesn’t run the programs they’re familiar with, even if it does have other programs that serve the same purpose. Mathew seems to think that by slapping familiar apps like RealPlayer on Linux devices people will find the operating system more comfortable.

What do you think, would you be more likely to use a Linux netbook with RealPlayer? Or would you prefer an open source solution like VLC or mPlayer?