Apple recently launched a $99 battery MagSafe Battery Pack that’s as convenient to use as it is expensive. Just slap it on the back of an iPhone and magnets will hold it in place while it uses wireless charging to refuel your phone’s battery.

So far no Android phone maker has offered a similar magnetic & wireless charging solution, but according to a report from GSM Arena, Chinese company Realme plans to be the first to do so. 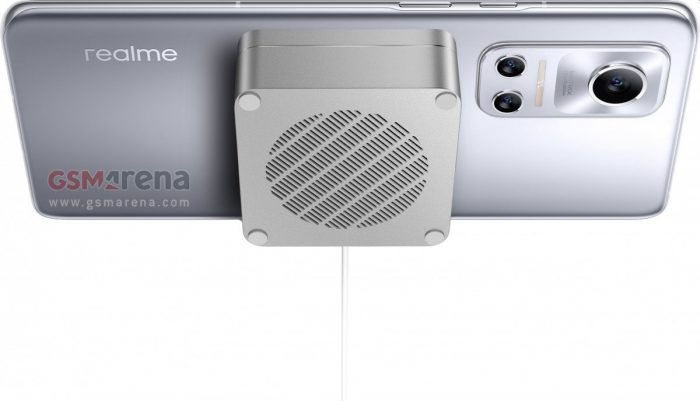 According to leaked images, the new Realme Flash is a smartphone designed to work with a new Realme MagDart battery pack that snaps onto the back of the phone and holds itself in place with magnets.

Get ready to leap to the next generation of Android wireless charging! 🧲 #realme is bringing to you 𝐌𝐚𝐠𝐃𝐚𝐫𝐭, Magnificent Magnetic Innovation, featuring #realmeFlash and much more.

Like Apple’s MagSafe Battery Pack, the idea is to let you charge the phone on the go without connecting any wires. And like Apple’s battery, the Realme MagDart supports both wired and wireless charging – it has a USB-C port that you can use to run a cable to your phone or other gadgets when that’s a more convenient option.

But unlike Apple’s batter, the Realme battery pack has a built-in fan to help keep the system cool. It honestly looks a bit clunky, but it might come in handy, since wireless charger might otherwise run hot. Apple’s version offers 15 watt wireless charging, but GSM Arena reports that Realme’s MagDart will go higher than that.

It’s unclear whether the MagDart will be compatible with any other phones from Realme or other companies. But the upcoming Realme Flash seems like a pretty decent flagship with a Qualcomm Snapdragon 888 processor, 12GB of RAM and 256GB of storage.