There are a ton of media apps for that let you stream music, videos, podcasts, or other content from the internet to an Android phone or tablet. But most have pretty lackluster speakers, which makes a good set of headphones or a speaker dock a good idea for folks that want to make an Android tablet the center of their media center.

Or you could buy a music system, that’s build around an Android tablet. RCA’s upcoming Internet Media System looks a bit like an old stereo system with a set of shelf speakers. But it’s powered by a 7 inch touchscreen tablet running Android. 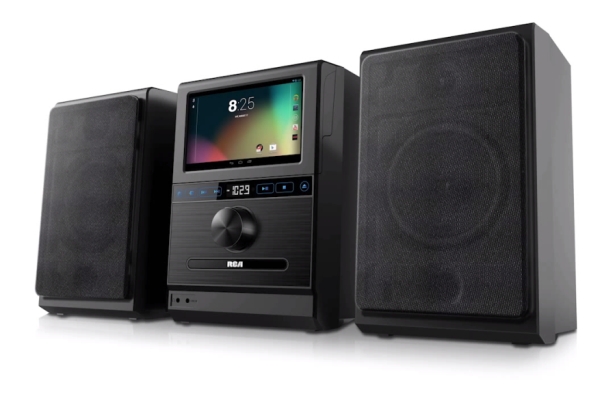 When the tablet’s locked into place, it acts as the touchscreen controls for the stereo. You can use it to navigate apps and even watch videos on the stereo system.

Or you can remove the tablet from the stereo and continue to use it. The tablet stays connected to the speakers over Bluetooth, letting you control media playback from your couch.

You can also hook up the Internet Media System to a TV using HDMI and use it to stream audio or video content to a bigger screen.

RCA’s demo video shows the Google Play Store and other media apps including Pandora, Spofity, TuneIn, and Rdio. The Android tablet comes with access to the Google Play Store, so pretty much any app that’s available in Google’s market should work on the Internet Media System.

While it’s the Android tablet that makes this device special, you can also use it as a standard stereo system. There’s a built-in CD player and digital radio tuner.

Android Police reports that the RCA Internet Music System should be available at Walmart soon. It’s not clear if the system is a Walmart exclusive, but in a video RCA posted to YouTube a few days ago, the company confirms that it will be sold at Walmart… and says nothing about availability at other stores.