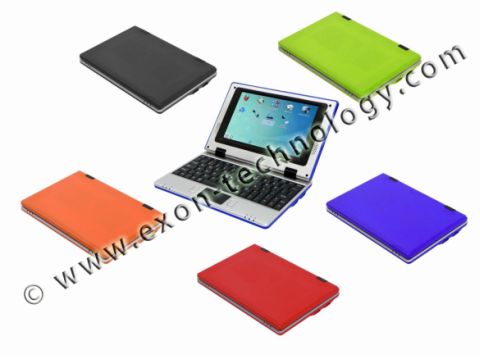 You know those cheap mini-notebooks with a custom LInux operating system, a tiny touchpad, and a 7 inch display that seem to be all over the place? Apparently they’re all made by the same company in China. And that company, Exon International Technology, is giving them a bit of an upgrade. Or at least a lateral-grade.

Exon recently replaced the 400MHz Ingenic CPU in these netbooks with a 400MHz Intel XScale processor. It’s also calling the new models the PC701-LX. The first netbook I’ve seen with the PC701 name is the Firstview PC701. I think it’s fair to say these are the same computer.

While the XScale CPU may nto win any awards for speed, it is at least a bit more common than the Ingenic CPU. The Intel XScale processor is used in a wide variety of mobile devices including cellphones and PDAs. I wouldn’t expect it to handle Windows XP very well, but it’s good enough for Windows CE or the light weight custom version of Linux that Exon preloads on these netbooks. The product page does say that the PC701-LX is Windows XP compatible. So I guess it’s theoretically possible to run the operating system. I just wouldn’t expect much from it.

Update: Exon says the Windows XP model has a 1GHz x86 CPU and 8GB of solid state memory, but costs more than the version with the 400MHz Intel XScale processor.