Gaming hardware company Razer offers a line of PC gaming accessories and a couple of gaming laptops, but now the company is preparing to launch its first gaming desktop. It’s not a typical tower PC though.

The Razer Tomahawk Gaming Desktop is a compact, modular computer that’s powered by a removable Intel NUC 9 Extreme Compute Element with up an Intel Core i9-9980HK processor. There’s also a PCIe slot for a discrete graphics card — Razer says the system will support up to an NVIDIA GeForce RTX 2080 Super GPU.

You’ll have to wait a little while to get your hands on the Tomahawk though — Razer says it’ll be available in the first half of 2020, and The Verge reports prices will start at about $2300 for a model with an Intel Core i7 processor, 16GB of RAM, 512GB of storage, and NVIDIA RTX 20-series graphics. 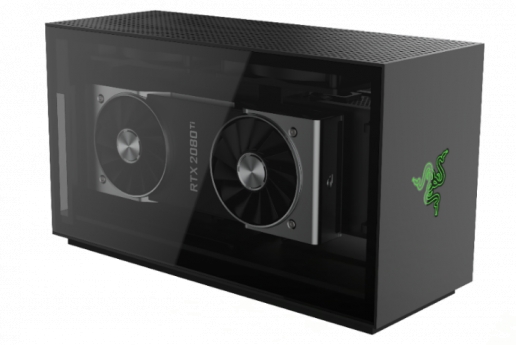 The system is customizable though — not only could you theoretically swap out the entire Compute Module (which houses the processor, memory, and storage), but Razer says you can also upgrade the RAM and SSD modules on the NUC card without buying a whole new card. Obviously the GPU can also be replaced, and Razer says so can the fans and other internal components of the computer.

In fact, if you’d rather not buy a completely assembled system, Razer will also sell the Tomahawk N1 case as a standalone product.

Razer says the system can output video to up to three 4K displays, and the computer supports up to 64GB of DDR4-2400 dual-channel memory or 32GB of DDR4-2666 RAM. Other features include:

While Razer hasn’t provided precise measurements for the computer, the Tomahawk N1 case is said to be a 10-liter chassis, making it smaller than most gaming desktops, but larger than a typical Intel NUC mini PC.

Speaking of Intel NUC systems, the Tomahawk was designed in partnership with Intel… which also plans to launch a modular mini PC with support for discrete graphics and a removable Intel NUC Compute Element this year. But with a 5-liter chassis, Intel’s upcoming “Ghost Canyon” NUC is about half the size of the Razer Tomahawk.

Razer’s new Tomahawk gaming desktop may not be quite as ambitious as the Project Christine modular PC prototype the company showed off six years ago. But unlike Project Christine, Tomahawk is a real thing you’ll be able to buy this summer.