Razer may be known for making gaming equipment, but the company is also getting ready to launch a product designed to get you up off the couch. The Razer Nabu is a wearable device that’s part smartwatch, part activity tracker, and potentially much more. 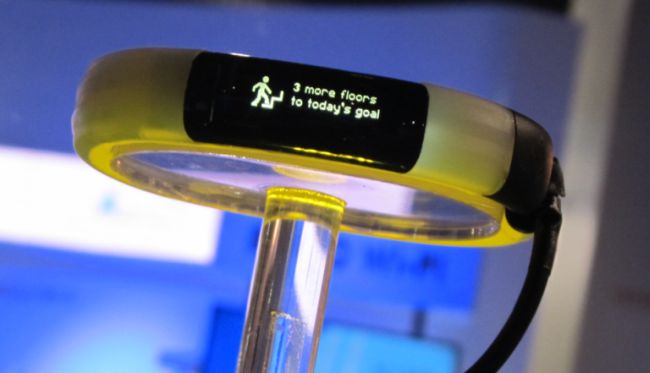 The Razer Nabu is designed to fit around your wrist like a watch or bracelet. You can use it to view notifications such as incoming phone calls or text messages and it also works as an activity tracker by counting steps, floors climbed, distance traveled, hours slept, places visited, and more. You can set personal goals, and basically treat activities as games you’re trying to win (which is where Razer’s gaming DNA comes into play, I guess).

You can program the device to recognize gestures, such as shaking to dismiss a notification or snapping your fingers to switch to sleep mode.

There’s also a social element to the Nabu. It supports band-to-band communication using something Razer calls Pulse. This lets it detect when other users who you’re connected to via social networks are nearby. Users could even do things like sharing contact details by shaking hands.

Like other smartwatches and activity trackers, the Nabu is designed to pair with an Android or iOS phone and sync your data via Bluetooth. And it’s designed to run for a week or longer before you have to recharge the battery.

Razer also plans to allow third party developers to access data collected by a Nabu (with your permission, of course). So while Fitbit users typically need to use a Fitbit app to get the most out of their devices, Nabu users could theoretically choose from a range of third party apps to sync with… assuming developers make use of Razer’s APIs.

Razer plans to start offering units to developers in the coming months. A consumer version could launch later this year.